We seem to have a bit of a dilemma concerning the central are of the field where most of our top players are based and it’s finding the most balanced midfield.
Ramsey has made his desires very public about wanting to play centrally but there’s a reason Wenger has moved Santi Cazorla there since Coquelin’s emergence. Ramsey has only proven to be successful with a dictator alongside him who can control our tempo and sit back whilst Ramsey gains the license to move into more advanced positions making late runs into the penalty area.

Over the last two seasons this has become a vital addition to our game but so has Coquelin’s shielding of the back 4 since the start of the calendar year. Wenger has to decide on which player is more valuable to our game at the minute and go with one or the other because at the moment it doesn’t help our game. Our build-up play is slow or non-existent.
If Arsene opts for Ramsey then a new DM is required, one that can do Coquelin’s defensive work but also control a game, pass between the lines and keep our play ticking. This is very hard to find, William Carvalho is the only player I can think of that can potentially do this job effectively but he’s currently injured and overpriced.
If Arsene opts for Coquelin then we need Santi back in there and unfortunately it will see Ramsey dropped because when fit Ox & Alexis should be occupying our flanks. 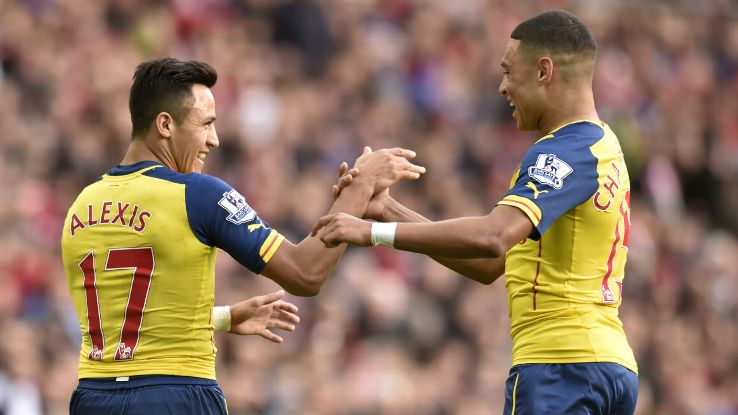 Alexis and Oz should be on flanks

I’m still unsure on whether Santi Cazorla is the answer there but he’s technically a lot better than Ramsey and although he doesn’t necessarily pass through the lines consistently, he’s able to turn out of trouble with ease and keep the ball moving.
If it was all up to me I’d put Jack Wilshere in there with Coquelin to be honest, he’s the only one that can potentially play various roles successfully in there and the most gifted of the 3 in my opinion. He’s shown for England that he can control, he’s shown in the past he can play the box-to-box role and has all the attributes but this is a moot point as he’s injured and behind the others in Arsene’s priority list at the moment.

Or does a fit Wilshere combine best of both?

Very tough dilemma for the boss but unless he feels Coquelin’s distribution will dramatically improve or Ramsey can become a more complete player that’s moves the ball progressively as well as moving with it then we have to change up the midfield pivot.
I really don’t want a repeat of last season where we force through a system that we blatantly struggle with and lose points on the way. Wenger has to upset somebody and make a bold decision with his preferred duo otherwise all the optimism we’ve built would be destroyed just to accommodate the happiness of certain players.

I am Subomi. An Arsenal supporter throughout my lifetime currently in my early 20’s. I am a graduate of West London’s Met Film School and an aspiring screenwriter. I do like to write about various topics that interest me and that tends to swing towards matters concerning Arsenal, it’s a passion of mine.