Almost 4 years ago Arsenal went to Reading at the same stage of the League Cup. It was one of the most amazing nights of Cup football that ended in The Gunners overcoming a 4 goal deficit to win 7-5 AET.

One of the founding members of Gunners Town, Anna Lvova, was inspired the folloing day to write about the events of the previous evening for my old site 1ND2OU. It remains one of the most beautiful pieces of writing and deserves a new audience….

There are a lot of wonderful and extremely talented Arsenal bloggers out there (including the one that so kindly agreed to post this) who make my life much more interesting by writing their pieces which I take an immense pleasure in reading. Some write tactics, some comics, some just write what’s on their mind. After an unforgettable night yesterday I felt an urge to write a story about love. So here goes.

She stormed into my life accidentally 13 years ago and has been an essential part of it ever since. I do not make a huge secret out of it; moreover I mention this relationship to people at the first chance I get. Some judge me, some are very understanding and others simply don’t care.

Unlike flashy young starlets who are happy just looking pretty and winning various beauty contests with the money their rich partners make available to them, she firmly stands on her own two feet, works hard to make a living and support her family. Despite her age she oozes class, beauty, nobility and pride. She is by far the greatest the world has ever seen. One wise man once said that “everybody thinks they have the prettiest wife at home” but this truly is the case with her. One glance at her and many fall at her feet and never get up again. She is religion to many, faith that they were fortunate enough to obtain and now obediently follow with their hearts and souls. Her name is known all over the globe and millions of people pronounce it with a brightest sparkle in the eye and the proudest smile on their lips.

We meet once or twice a week for a brief 90 minutes but in that time she makes me feel things it would take others months or even years to achieve. She takes me to highest highs and lowest lows. She makes me laugh, she makes me cry, she makes me angry and oh so happy. She is The Arsenal. And she is mine.

Last night (30th Oct 2012) we had arranged to meet. As usual I made sure everything I had to do was done well before that time. I put on her favourite outfit (she loves me in my red and white top with a little cannon on the chest), I prepared our favourite snacks, I chilled our favourite bottle of wine, I got all her favourite music tracks ready (these days she’s much into The Beatles, Ricky Nelson and the likes). Just as before every meeting of ours for the past 13 years I was nervous in anticipation, butterflies doing somersaults in my stomach. And finally there she was.

She looked very different from the last time I saw her. Much younger, though certain of her feature showed that experience and wisdom. I smiled. She was a sight as always. “This is going to be a great night”, I thought to myself as I watched her boss me around like she always does.

But in a few minutes it became obvious something was terribly wrong. As time passed I couldn’t help but feel she was not comfortable being here, she came only because she had to, not because she wanted to. It wounded me deeply. I tried to understand, desperately seeking hints, hidden clues but she wouldn’t open up to me. 37 minutes into our date I found myself wishing I wasn’t there either. I paced up and down my room; I curled into a ball on my sofa wishing I could snap out of the state she had put me in. I resented the anger, desperation and inevitability that I felt at that moment. I tried to talk to her, to get her to answer. Then finally she turned to me, looked at me with those boyish brown eyes and said “I still care” storming out of the room.

I felt lost. I wanted to run after her, wrap her in my arms and tell her it was going to be alright. The anger had long gone. I was just incredibly sad.

15 minutes later she showed up again. I desperately looked at her for answers. She was still very quiet but something in her eyes had changed. I got a little glimpse of desire and my heart skipped a beat. Here it was. Hope. Still just a tiny embryo but growing with each passing moment I didn’t push my luck, I just patiently waited for her to come around. I encouraged her in any way I knew, I sang her favourite tunes, I talked and talked and then… it finally happened.

She spoke to me. Stuttering at first, carefully trying to find words to express herself, but as the time passed growing more and more vocal and confident with each thought that she expressed. English, Arabic, sharp strong phrases in German, flowing Russian and emotional French. Here she finally was, Hungry, willing and determined. Just the way I love her. She cared. She wanted to make me happy. And I believed again. I froze looking at her as my heart pounded and a smile stretched on my face.

She stayed slightly longer than usual this time but by the end of the evening things were back on track between us. I sat there looking at her happiness, joy and relief and my heart sang a thousand melodies. She did it again. She made me feel alive. She presented me with a precious gift of unforgettable memories.

She embraced me before disappearing into the night and whispered, “See you Saturday”. I smiled and nodded. 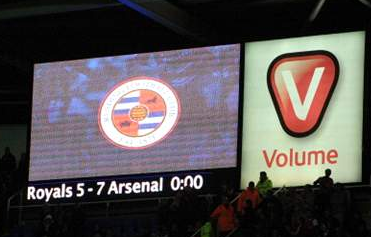 I couldn’t sleep for hours after. I kept telling people about our date, reliving the brightest moments with an incredible warm feeling of contentment; I stayed in my bed staring at the ceiling with the most stupid grin until sleep finally took over as the sun began to rise. This morning when I opened my eyes it took me quite some time to figure out whether it had all been true or just a very vivid dream. Needless to say almost 24 hours later I am still smiling.

Thank you my beautiful Arsenal. I love thee. Anna xx

I hope you enjoyed this blog with a difference

Passionate fifty-something Arsenal supporter who has been making the journey to N5 regularly since the early 1980s – although his first game was in 1976. Always passionate when talking about The Arsenal, Dave decided to send a guest blog to Gunnersphere in the summer of 2011 and has not stopped writing about the Gunners since.

He set up his own site – 1 Nil Down 2 One Up – in February 2012, which he moved on in 2016 to concentrate on freelance writing and building Gunners Town, which he launched with Paul in 2014.

The objective of GT was to be new and fresh and to give a platform for likeminded passionate Arsenal fans wishing to write about their team. Dave still of course, writes for the site himself and advises the ever-changing writing crew.