Ramsey on 12 minutes wins the match

Well, that was tough, much tougher than I expected. We took the points for the eighth consecutive game without really being troubled after we scored, but found chances hard to come by to double the lead. You can see why Burnley drew with Chelsea and United and took all three points against City at Turf Moor. Although it seems these days any half-decent side can overpower Pellegrini’s men.

The game wasn’t much it terms of actual football happening, so I’d rather do my usual trick in these circumstances and break the review into points of interest.

The squad and approach

I was really surprised to see an unchanged starting XI. Before the game kicked off I thought that maybe at least Ramsey was moved infield with either Cazorla or Ozil wide, however I was wrong even here. Aaron once again played the role of a winger.

The only changes to the side that bested Liverpool a week ago were Szczesny for Macey and Chambers for Gabriel. Both filled me with joy, as I was nervous to have a rookie goalkeeper even for one game, while I’ve already expressed my point of view concerning Chambers. He should at least make the bench because of his versatility. Should the need to sub Bellerin/Debuchy arise, there must be a right-back at the ready. And as having three defenders on the bench is too much, one of them should be able to fill in at two positions. Chambers is the only such player.

However, the respective omissions of Arteta, Wilshere and Debuchy left me scratching my head. Did Arsene decide to just give them one more week or are they genuinely missing out due to the high level of competition?

The latter option seems unlikely to me. Surely at least the skipper could be reinstated at Flamini’s expense? However, it looks weird when three players of this calibre don’t even make the bench for the second game running.

As for our approach, we went with a rather unusual one, namely: we put a lot of effort into scoring an early goal. Sanchez blasted a shot wide early on and the combination which led to Ramsey smashing the only goal info the net saw four shots from four different players.

After the goal we just fell back, kept our shape and exercised what can be called “sterile possession”. Whether it was sterile because we were content with it or because Burnley pressed us all over the pitch for the duration of 90 minutes, we will never know.

They had a few. The two most dangerous happened during the first half. No, three.

The first one occurred at 0-0 when Vokes burst down our right only to be denied by some brilliant goalkeeping from Ospina. The other two were from free-kicks. I have to say these were some dodgy decisions from Mike Dean. I’m not implying he was on Burnley’s side, he was, as someone on Twitter nicely put it “shit all around”, but these free-kicks were both flimsy calls, to say the least. To me the situations which led to what Dean viewed as fouls were just common duels. Coquelin and Koscielny won both, the ref whistled and Ospina found himself putting some solid walls of players together.

The first kick was blocked by the wall (was it Coquelin?), the second resulted in Ospina going full-stretch to deny Trippier. A good job by the Colombian.

Burnley had one more decent moment I can recall, deep into the second half, after Bellerin got fooled on the right and Boyd needed to only hit the target. Luckily, he swung his leg at thin air. 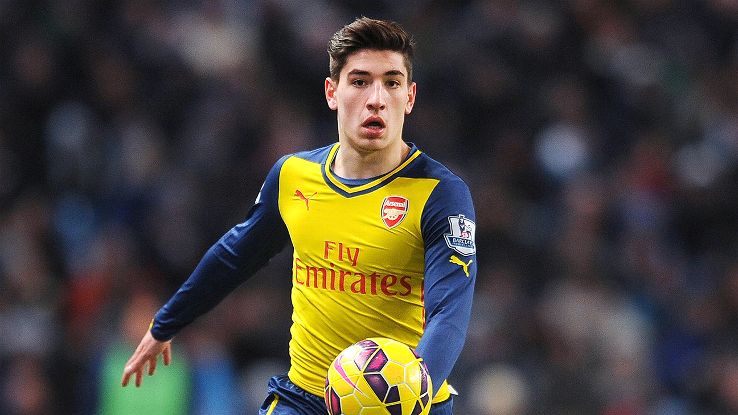 I may be seeing things where there really is nothing to see, but I didn’t like the way Bellerin played as much on Saturday. I definitely didn’t like his defensive contribution.

Firstly, he was caught high upfield several times, the most damaging could have been at 0-0, but, luckily, Ospina intervened. Secondly, the young Spaniard looked flimsy in one-on-one situations. Whether he faced Barnes, Vokes or whoever played at right-back for Burnley, I grew less and less sure of his ability to cope as the game went on. He was again at fault at around 70th minute, when Boyd failed to get on the end of a low cross. Cross, incoming from Bellerin flank after Hector was roasted there.

Was Bellerin too sure of himself after a brilliant showing against Liverpool? Was it the approach of the opposition, some particular skills demonstrated by Barnes or just good old exhaustion? I remember Arsene expressing concerns in late December as to Chambers’ physical and mental condition. Wenger noted, that all young players “hit the wall” after 15-17 games and need a breather, a period to recharge his batteries. Bellerin played slightly less this season, something around 12 games, but it’s not exact science we are dealing with. The Spaniard may have hit his personal wall a bit earlier. If so, remove him from the firing line, reinstate Debuchy or give Chambers a run of games, if the Frenchman is still not ready.

I’m sure Wenger noticed what I did: that Bellerin was, largely, not coping with Burnley’s threat. So why did he keep Hector on, despite having Chambers on the bench?

To this I have only one suggestion: Bellerin was the only player giving width to our attacks. Monreal sat back more than usual to keep an eye on Ings, Sanchez looked refreshed and up for it, only for his knack to drift infield impeding us from stretching the play and Ramsey is just not a winger, simple as that. He fared well a week ago, which was, in my opinion down to the opposition and to Rambo’s more disciplined approach to his duties as a wide man.

This time around he was less disciplined, preferred to move inside on a number of occasions, and so Bellerin was handed an enormous task of playing as both a winger and a defender. No wonder he wasn’t particularly good at both.

I felt that, as soon as we stretch the play, we’ll score that second and put the game to bed. We needed someone to get behind the opposition’s fullback and get crosses in. That’s where Ox would have come in handy but even without the Englishman we had options.

We could have subbed Ramsey for Welbeck, or Cazorla for Welbeck and moved Ramsey to play alongside Ozil or Coquelin. We, or, rather, Arsene, could have let Walcott come on. Finally, he could have just swapped Ramsey’s and Cazorla’s/Ozil’s positions. He did none of these and as a result we (unsuccessfully) tried to break through the overcrowded midfield and thus played into Burnley’s hands, while also depriving Giroud of service. The Frenchman tried dropping deep to collect the ball and gave up after a few failed attempts and so Arsene chose to sub off Giroud and bring on Welbeck.

Again, I can only guess why Wenger did nothing to stretch play. My bet is that the Frenchman didn’t want to interfere and fix what wasn’t really broken. We coped with Burnley the way it was, and so Arsene decided to hold onto what we had and not try and score the second goal.

Man of the Match, hands down. 11 interceptions a league high in a single game,) 9 ball recoveries and two successful tackles. The interceptions stat is particularly impressive, since Burnley only enjoyed 31% possession and made only 194 passes. That means more than every 20th pass Burnley made was intercepted by Coquelin!

As if this wasn’t enough, Coquelin actually started the only attack that led to a goal by intercepting (surprise!) a pass and vigorously attacking the space in front of him. He then celebrated no less brilliantly.

I could rant on about how good our Coq was, but I feel no need. I’ll just give you the manager’s take on Francis:

“First of all he’s shown his individual quality winning the ball and passing it quickly, and he’s very strong in the challenges. He also contributes to the balance of the team and that’s very difficult to measure. You know that the balance of the team sometimes depends on one player who has some characteristics that the others don’t. He looks like he has hugely contributed to that.”

And the link to the usual “By the numbers” section over on Arseblog.

It was not the best of performances from us, but important thing is, we won and won where others dropped points and dropped these points for a reason.

Our eighth consecutive win didn’t see us bridge the gap to Chelsea, unfortunately. The Blues scored an 88th minute goal from their only shot on target to get the points at Loftus Road and thus we trail Mourinho’s men by seven points having played a game less.

We didn’t get room for manoeuvre from behind either, as United thrashed City at Old Trafford. As a result we have put some distance between us and Pellegrini’s side but are still only a single point ahead of United. Tough! Then again, when wasn’t it? You want a high placed finish you battle to the very last moment.

And remember, we are playing Reading in the semi-final this week. We are going to Wembley, guys.

Have yourselves a very good week.