“We want to finish on a high at the Emirates and we want our fans to go home happy, full of hope for next season.

We have fought very hard to directly qualify for the Champions League and we want to get over the line and finish the job, which we couldn’t do on Wednesday night [against Sunderland]. We want to do it in a convincing way on Sunday.”

That’s what Arsene Wenger said during his press-conference. Have to say the game against West Bromwich now looks crucial in terms of the Cup Final. It’s a chance to lay down a marker, sweep aside a team that will no doubt sit deep and show Villa they won’t be able to put ten men behind the ball and not get punished for it. If we find a way to break West Brom down, then Villa will think twice before adopting this tac come 30th May. You can read more on the importance of our final league game here

“Will I rest one or two players? Certainly. What is most important for me is for us to win the game on Sunday. We have enough experience in our dressing room to know that what is important is the next competition.”

Unfortunately, we won’t have Danny Welbeck to help our cause:

“Do we have anybody back for Sunday? Danny Welbeck no, Alex Oxlade-Chamberlain is back in full training today [Friday], and Mathieu Debuchy as well. They might be a bit short.”

Ox back in training

I also don’t like nothing was said on Arteta, though him, Oxlade and Debuchy were all pictured in training today, so I don’t exclude all of them making the bench and even coming on at some point. I would love to have Oxlade and Debuchy as fit and ready as possible for the final. Starting Debuchy over Bellerin may even be the sensible thing to do, as the Frenchman is more experienced and more conservative, something that will make room for Theo Walcott in the squad. But we’ll cross that bridge when we get there.

Regarding our approach, I’m torn between two options:

I’m pretty sure Wenger will adopt the former strategy. Both to demonstrate we can break defenses down (thus showing Villa exactly what they will be in for in a week) and because it’s the final home game against supposedly inferior opposition. Arsene rarely utilises the pragmatic approach in front of our own fans, whatever the opponent.

Assuming Wenger really will set his team to dominate, which players are best suited for this? 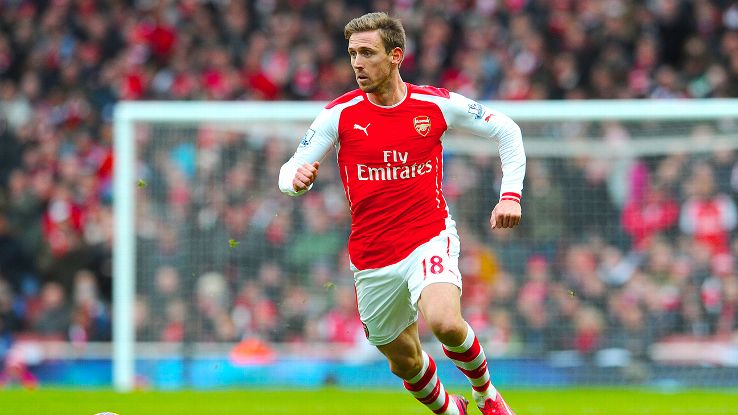 Nacho should be back

Again, I think Szczesny might start. Simply because I have a nagging feeling he will do so in the final and the Pole may need some minutes before that.

Should we rotate the back four and to what extent if so? I’d go with the “don’t fix what ain’t broken” formula. We have a stable (and quite stellar) defense in Bellerin-Mert-Kos-Monreal. These four guys played for the entirety of the second half of the campaign and did brilliantly. So unless Arsene’s planning a surprise start for Debuchy (surprise considering his recent spell on the sidelines), Gabriel (as Arsene obviously prefers Mert to the Brazilian at this point in time) or Gibbs, I wouldn’t introduce any changes. They simply don’t make much sense and we all know how reluctant Wenger is when it comes to rotating his back four.

Here EVERYONE could use a rest. Ozil maybe a bit less, as his January wasn’t as packed as Santi’s or Ramsey’s. Coquelin may also be omitted, though in his case for another reason, namely: he’s mostly a passenger in our passing game. That’s why we are linked with Schneiderlin strongly and I wouldn’t be at all surprised should Arsene sign the Saints’ man.

The again, it’s risky just swapping your midfield for something new entirely, so my rough guess is only Cazorla will get a rest and we’ll see a Ramsey-Wilshere-Ozil trio start.

Will either Rambo or Wilshere be able to maintain their defensive discipline the way Santi did against Sunderland? I have my reservations about Jack, but Rambo should be able to do it. As it turned out the Welsh Jesus made five successful tackles against the Black Cats, leading all players. That’s despite playing closer to the opposition’s final third than Cazorla. Make no mistake, though, by saying the attacking side of Rambo’s game suffered that night: he completed over 120 passes, second only to Cazorla.

Our player of the season is another one badly in need of a rest. Walcott is an obvious like-for-like in terms of position, while Rosicky (who will stay at the Club for another year,) is a better replacement in terms of overall contribution.

The legend stays at Arsenal!

But we have another problem: Giroud is also dead on his feet. Welbeck’s unavailability makes omitting Giroud very hard indeed and so it’ll be interesting to see, how Arsene will manage to give a rest to both Alexis and Ollie.

My guess is that Theo has a chance to start centrally, while Rosicky will play on the left. Who’ll play on the right, though? Oxlade? He’s my pick, however it’s unlikely Wenger will start the Ox in his first game in over two months.

Which means a start for another central midfielder on the right, unless of course Arsene starts either Giroud or Sanchez, which I wouldn’t recommend. Say, Jack on the right, Rosicky on the left and Coquelin in his usual position with Ramsey and Ozil in front of him. Cringe.

We only really need to rest three players: Cazorla, Sanchez and Giroud, but it’s proving a hell of a tough job without Welbeck and with not completely ready Oxlade. I honestly cannot find a way to rest these our two attackers without having to play someone out of position. Fingers crossed Wenger will figure something out.

I have to say West Brom could prove tricky. They are on a fine run with 13 points in 5 games, 4 clean sheets and defeated Chelsea and United in the process. Their main threat, Berahino, is also in good form, something he confirmed with a brace against Chelsea. I even wonder whether we’ll be better off with Gabriel for Mertesacker in defense. Just in case.

But we have to win. It’s the final game, a home game and Arsenal should be signing off with a win, especially after a couple of underwhelming results.

Football is a Simple Game, like a simple meal, unless of course the Arsenal Players are making it!!
#GoodOldArsenal We’re Proud to say that name – FA Cup Single Special