Not fair to expect and impact in 15 minutes

I’ll get straight to the point: can someone explain the logic of substituting Olivier Giroud with Theo Walcott when the opposite team defends well deep into their half?

I don’t get it and yet Arsène Wenger does it quite often.

A common sight these days

At a time in the game that saw us putting some real pressure on Liverpool’s defensive line, the manager decided to replace the Frenchman with Feo, who couldn’t find one single space to run into and obviously had no impact whatsoever in the final minutes of the encounter.

Brendon Rodgers and his clearly disproportioned teeth called it right in deciding to surround our playmakers through the middle and found the perfect way to keep us quiet until the final whistle by replacing an attacking midfielder (Coutinho) with an extra defender (Moreno).

How could you possibly expect Theo Walcott to run past a defensive line composed of two holding midfielders and five defenders?

He can’t, no striker in the world could apart Messi, Neymar and Cristiano Ronaldo.

The same happened against last season at home against Swansea, Chelsea and Monaco, three games we didn’t win despite the substitution; personally, I can’t recall a game whose dynamics were changed by the introduction of Theo Walcott in replacement of Olivier Giroud.

Who has the better impact?

To my eyes, Theo Walcott is not an impact player to be thrown in when you can’t break the opposite team’s resistance in their own box: he needs spaces to exploit his pace and time his runs, there’s no point in asking him to win us the game when our opponents barely move from their own penalty box.

In my humble view, Olivier Giroud is a better option, if we want an impact striker on the bench; it doesn’t mean he’s not good enough to start games, he is just more likely to leave a mark on the game if called upon, compared to Theo Walcott.

Giroud off the bench to save game at Goodison last season

He can wrestle defenders for a loose ball; he can add presence in the box if we decide to throw long balls in and can free some space for his teammates, attracting defenders around him: is there a better definition of impact player? I don’t think so. Indeed I recall him coming on win the FA Cup Quarter Final v Everton in March 2014 and Wenger praising his impact as a sub

I don’t see any point in throwing Theo Walcott in and playing the same football, pretending he can do what Olivier Giroud does best: holding the ball, linking with others around the box and battling with centre-halves for the best position in the box.

Theo Walcott should start games and prove he can do a job at the Arsenal; he’s been rewarded with a new, very rich contract and he must be given the chance to show he can be our main man.

He has a completely different set of skills compared to Olivier Giroud but he could form an unbelievable trio with Aaron Ramsey and Mesut Özil, both excellent at picking any forward’s runs; he doesn’t have the physique to go into a fight with the likes of Terry, Skrtel, Mangala or Smalling but he has the pace and the intelligence to trouble them.

He is more mobile and more composed than Olivier Giroud, as well as more flexible and therefore able to swap positions with Alexis Sanchez, for instance, and give Arsène Wenger more solutions.

Changing the game plan? Not necessarily

Playing Theo Walcott up front could force Arsène Wenger to slightly change our game plan and the players themselves should adjust to their new teammate, however changes won’t be as big as the blatant differences between him and Olivier Giroud could suggest: with the Frenchman on the pitch, we know we have a way to get out of pressure by throwing a long ball towards him; that wouldn’t change with Theo Walcott upfront, we’d only need to aim BEYOND him and not TO him because he wouldn’t win any physical duel against any centre-half in the league; instead, he can easily overrun any defender and reach the ball first.

Another weak point of Theo Walcott is his link-up play: he’s not really good at exchanging passes in tight spaces and often concedes possession to defenders, however he’s excellent at moving between lines and we have tons of players who could pick his runs.

We don’t need to involve him in our passing game; we’d just need to keep an eye on his movements and slip the ball behind the defensive line; nine out of ten times, he will reach it the first.

The lack of presence up front could easily be balanced by his movement off the ball, something we are in desperate need against teams parking the bus; Olivier is many things but he’s definitely not a mobile striker, which makes life a bit easier for defenders compared to Theo Walcott.

Not facing a static, although strong, main striker could result in more troubles for defenders, especially if the forward is quick and intelligent like Theo Walcott; our oldest-serving player can stretch defensive lines by roaming across the whole attacking front, creating spaces for himself to exploit or allowing time on the ball to our more creative players – something we should not overlook. 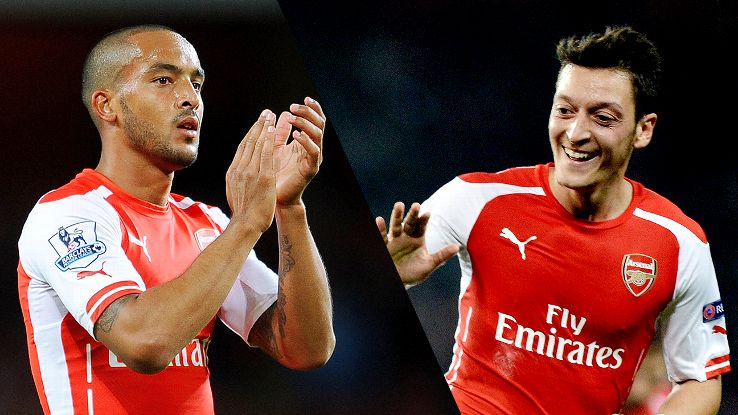 The combination we need to see

Also, players like Mesut Özil, Santi Cazorla, Aaron Ramsey and Jack Wilshere would thrive alongside a forward who likes to dictate passes with his runs and invite through-balls with his movement.

I would love to see Arsène Wenger giving Theo Walcott a good run of games as main striker, that would allow all of us to have a better idea of what he could really bring to the team; so far, we’ve never seen him starting up front in back to back games and it is then hard to judge the player.

Theo Walcott is far from being the finished product but only time on the pitch would allow him to address his faults and improve surely!

Give him a chance, Arsène.

Give us a chance to understand, while you are there.

Thirty-something Italian, currently in Switzerland. Gooner since mid-ninties, when the Gunners defeated my hometown team, in Copenhagen. Twelve years ago I started my own blog (www.clockenditalia.com) after after some experiences with Italian websites and football magazines. Debate, don’t insult or you’re out.

Speed – Does Wenger use it effectively for Arsenal at present and if not should he?
Ambition? Competition? Incomplete Squad? Why Arsenal fans need to rationalise the transfer window

3 Responses to Walcott never will be an impact player against a compact defence but Giroud can be so….