What could be more Arsenal than losing at the Emirates to a team that had never won in England before (step forward Olympiacos), before beating arguably the best team in the world at the moment. Yes, I’m looking at you Bayern. Not only did Arsenal beat Bayern, but they stopped them scoring for the first time since the beginning of May. Not bad for a team that can’t defend, eh?

Just a few weeks ago, Arsenal fans had given up on the competition.

“Just a distraction from the league anyway.”

“I hope we do go out, teach Wenger a lesson.”

Now? We’re going to win the bloody thing! Or at least cruise through a group that we had previously waved off as it packed its bags and wandered off over the horizon. Sure, we’re still last in the group, but what do we need to do to ensure we do progress into the Last 16?

I’m glad you asked. Here’s how our group looks at the moment:

Arsenal travel to Munich, while Olympiakos host Zagreb. That’s the other team that beat us, remember? Anyway, let’s assume that the worst happens in the other game, as per the Arsenal way, and Olympiacos beat Zagreb at home by a couple of goals. Not too hard to imagine to be fair, as everyone knows that going to play in Greece is scary and loud and scary. Meanwhile, although Arsenal are more than capable of getting a result in Munich, let’s imagine we’re not quite Brazil of the 1970s and we actually lose. Yes…. Lose. Narrowly, but nil points nevertheless.

That would leave Bayern and Olympiacos on 9 points, and Zagreb and Arsenal on 3. Cue meltdown on Twitter. But wait… all hope is not lost.

Arsenal host Zagreb, Bayern the scary Greeks. Now, I wouldn’t call myself the most positive person in the world, but even I fancy Arsenal to beat Zagreb at home and if we don’t, there’ll be no clever calculations to put us through. No “if Zagreb beat Bayern by 43 goals, and we beat Olympiacos by 17, and they then lose six points for having scary loud fans, and then another three for having six players with massive beards, we might scrape through on goal difference.” Nope. But back to being positive, we beat Zagreb. This is also the perfect game to boost the old difference de la goal.

In Munich, Olympiacos are unable to summon their loud beardy powers and comfortably lose to Bayern. That leaves Bayern on 12 points, Olympiacos on 9 points, Arsenal on 6 points, and Zagreb wi… who cares.

Dun. Dun. DUUUUUUUUUN. It’s time. Arsenal travel to Olympiacos, and Bayern are off to Zagreb. Let’s take a detailed look at the two matches. 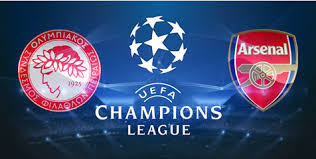 Right, Olympiacos vs Arsenal.  Arsenal have lost their last three games away to the Greek side, 3-1, 2-1, and 1-0. But most of those have come in the final group game when Arsenal have firmly settled for second place, and have played with Squillaci in defence, Claude and Ty as the two holding midfielders, and Bully as a trequartista. Basically, exactly what the game this year should have been. But with Arsenal three points behind Olympiacos in the group, it’s win or go home or rather win or go out. I imagine they’ll go home either way.

Now comes the complicated bit. Focus. Focus. The Champions League are far too special to use just goal difference, so they use a clever array of formulas to ensure that whatever team goes out always feels hard done by. So if Arsenal beat Olympiacos, and both teams therefore finish on 9 points, what happens?

First, it’s decided by head-to-head between the two. Well, that’s three points each. NEXT.

Then, it’s goal difference in the head-to-head matches. So Olympiacos beat us by 1 goal at the Emirates. So if we win by two or more, we’re through to be knocked out in the next round. Get In!

After that, we skip through total goal difference, better UEFA Ranking out of the two, a beard off (Ramsey automatically nominated), rock, paper, scissors, and then a fight to the death between the smallest players from each side.

Up for the beard off

So then, what fun that was. To summarise, we can lose to Bayern as long as we then beat Zagreb and then go to Olympiacos and win by two or more goals. A 3-2 win for Arsenal, matching the reverse fixture, would also probably be enough. All that just for the chance to draw Barcelona in the next round! Deary me, it’s not easy being the best team in the world.

Right, a bit about me. 17, live in London and support Arsenal. Obviously. Mood changes far too much depending on results and how much gel Giroud uses. Fan of most sports, but football far and away my favourite. Also found contributing to @ByTheMinSport, particularly @ByTheMinArsenal.

Favourite Arsenal moment …. ARSHAVIIIIIIIIIIIIIIIIIIIN is probably up there. Just for the utter shock that he scored against Barcelona. Thoroughly enjoy watching players like Nasri, Sagna, and Van Persie rot on the bench. Hopefully my blogs aren’t too painful to read!

The Evening the Arsenal Grew Up in Europe – Defensive masterclass and counter attack!
Arsenal WILL be flying the flag for Great Britain at the Euros Mr Pardew

3 Responses to An Amusing, doing things the hard way look at what Arsenal must do to get our of the Group