Our annual trip to Munich is coming to a head today, with yet another showdown against the Bavarian giants on the cards.

Undoubtedly we are the underdogs once again. Because of our far-from-stellar form, because of the general lack of belief in our ability to get a result, and obviously because Bayern are just a really good side. But I do wonder whether a change of competition combined with that underdog status can see us put in a performance.

Not the least as we have an (almost) fully-fit squad. Yes, there’s no Cazorla or Ramsey, but apart from these two we’ll only lack Lucas Perez. A player I would have loved to start, but I doubt Arsene would agree with me anyway. The Spaniard will be unavailable through what was described as a “slight hamstring injury”, so it is a moot point regardless.

On the bright side, we welcome Xhaka back, Per Mertesacker made the trip too, and of course Elneny is back with us. A bit more midfield depth and an interesting dilemma for Arsene to ponder.

Xhaka is available once more

Arsene confirmed Ospina will start in goal, so that’s one piece of jigsaw in place. Not really a surprise, with the boss pointing out Ospina’s role in getting us through top of the group:

“He has produced some good performances and we are in the last 16 and finished top of the group because of him.

“If you analyse his performances in every single game, we are where we are because of his great performances.”

The back four is slightly more tricky to predict. I think Gibbs will get the nod again. He appears to be our cup left-back, much the way Ospina is our goalie, making five Champions League appearances, four from the off. I’m sure that’s why he was played vs Hull, just to give him some minutes. Bellerin, Mustafi and Kos should complete the back line.

Gibbs to be given the nod?

The midfield remains a mystery. I’ll start with Jeremy Wilson’s Monday suggestions Ozil can be dropped altogether for the game. On Tuesday he appears to have backtracked slightly, saying: “concern at the form of Mesut Özil has prompted a suspicion that he (Wenger) might at least redeploy his playmaker away from the usual ‘No 10’ role in order to solidify the team.”

Wenger was a bit cautious in his comments, stopping just short of saying Ozil will start:

“I have no doubt that we play in Germany and Ozil is highly focused to have a good performance.

“Ozil has played here for a few years and perfectly knows our team and the way we want to play in every game.”

Now, I’m usually not the one to say this, but I can see merit in dropping Ozil completely over moving him to the flank, if Wenger does indeed contemplate either. Our German playmaker is clearly out of form, which can render him particularly useless in defensive scenarios. And I’m pretty sure we’ll play defence first today.

Wenger can, of course, move Mesut out wide, and instruct him to play as a striker when the team is out of possession, so that the actual striker can help out the fullback, but we are going to have one less body willing to defend anyway. I do feel like me suggesting dropping Ozil is a moot point, because chances are Wenger won’t, however the opportunity is worth exploring at least. 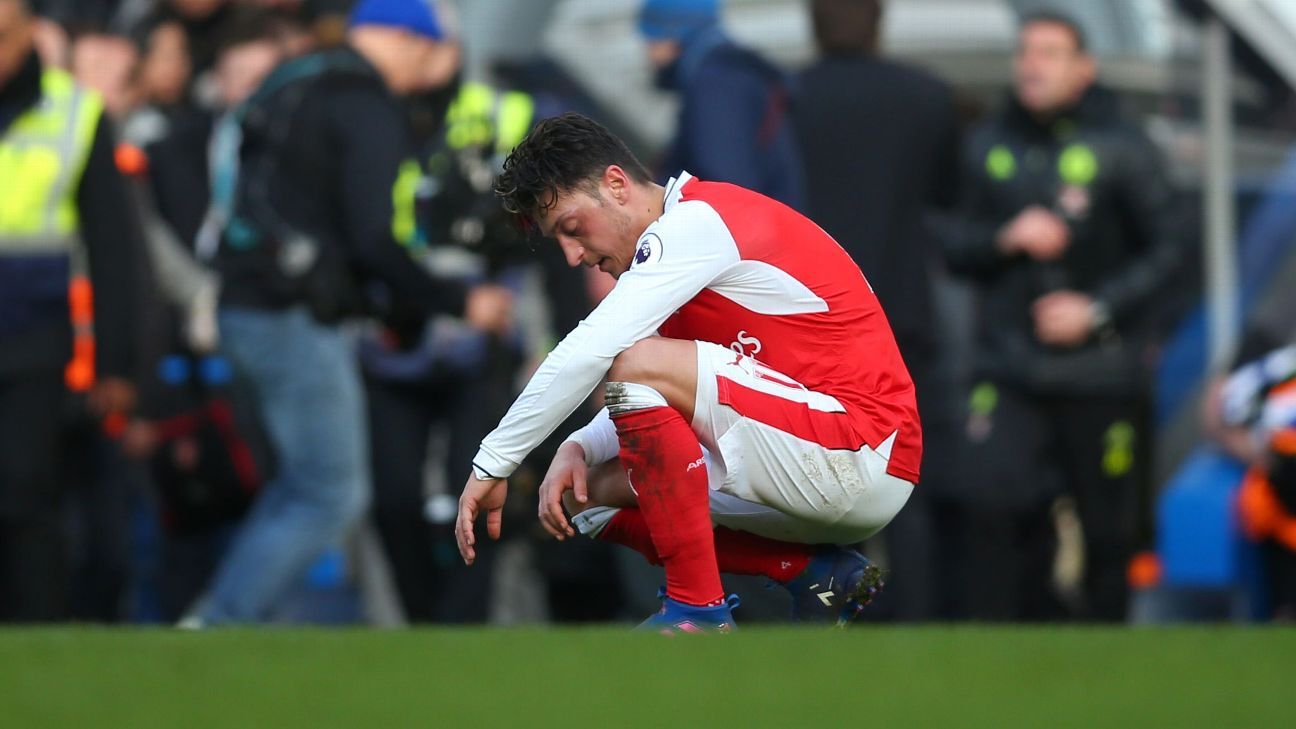 Worth dropping our maestro?

Mesut’s inclusion and the role he’ll play has a knock-on effect on the rest of our midfield, though. Will the German be a part of the front three, the midfield, or will he be omitted entirely? I’ll pick a half-measure, purely for the purposes of this preview. In that case I would assume we’ll see Francis Coquelin, Granit Xhaka and Alex Oxlade-Chamberlain as the three central midfielders.

I can’t see Arsene dropping Coquelin for this type of game, so it’s a race between the Swiss, Alex and Elneny for two spots. I’d go with Xhaka because we lacked a calm passer of the ball recently. He was a starter in every game prior to getting suspended, so his importance cannot be overstated. Between Ox and Mo I’ll plough for Ox, who’s been phenomenal in central midfield lately, though a case can certainly be made for Elneny. The Egyptian is a tidy passer of the ball and a tireless runner, and you can see how both qualities can come in handy today.

The front three is another conundrum. Perez is out to make my job a little easier (wish he wasn’t), but if I’m to stick to my plan and presume Ozil is playing left winger today, I’m left to pick two attackers out of five. Considering Alexis is a nailed-on starter, I have to pick one out of four.

I’m going to go for Danny Welbeck. He hasn’t played a lot lately, which makes me think he’s been saved for today. He is lightning quick, a willing worker in defense and is equally comfortable out wide and up front. Danny can seamlessly interchange positions with either Alexis or Ozil and we won’t be worse off for it.

Walcott has been pretty anonymous recently, Iwobi is sometimes to prone to having a bleak game, given his lack of experience still, while Giroud looks a perfect sub for me in a game like this and doesn’t fit the overall picture of a mobile interchanging front three. Plus he has a non-existent link-up with Alexis. Then again I can be entirely wrong with a lot of my predictions, but particularly with the Frenchman. He has proven to be a pain in the backside for Neuer, plus he is the ideal pressure release valve. Just lump it towards Ollie and he’ll battle it out.

Without any doubt Bayern Munich is the toughest opponent we have faced, or indeed will face, this season. They have a squad filled with quality in every position, they have a manager with tons of experience and they are, unlike us, top of the world in the league. Where they have only lost once, it has to be added. They even have Robben available for once (no Ribery though).

In short, it’s going to be incredibly tough for us to get a positive result against, but I wouldn’t be me without saying we can do so. As always, I believe in the quality of this squad (which ostensibly lacks only one key player) and I believe in Arsene Wenger getting the tactics right, because he has shown he can do that away from home in big games.

Back here with a review.

As Stale and Stale can be – Wenger’s Selections and Substitutions Baffle AGAIN
Without Wenger Arsenal Inc. will no longer be a ‘Football’ Club

One Response to Ozil out left in a 433 versus Bayern Tonight as Wenger opts for solidity?