Well, that wasn’t so bad, was it? For a while we looked ropey as it gets, making incredibly hard work of what should have been a relatively straightforward win, but we got there in the end. A kick up the backside from Arsene Wenger at half-time (I’d like to think there was one) knocked some sense into our dodgy ways. This resulted in a much-improved second half performance.

Let’s get our teeth into the nuts and bolts of it all.

Quite surprisingly, Wenger stuck with a 3-4-2-1. I thought we needed an extra midfield body more than an extra defender, however I’m now a true believer in the Nacho Monreal church. What a stupid thing to wish – drop the Nicolas Cage-like Spaniard for a faceless midfielder.

Wenger tweaked some other personnel too. Mohamed Elneny came in to provide some defensive security, Aaron Ramsey was pushed higher up and Alexis Sanchez was handed a first start. It was interesting to see Arsene keep Ozil on the bench, especially against the type of opposition which required a lockpick.

More interesting still was watching Ozil come on for Sanchez in the dying stages. Is that indicative of Wenger’s thinking? Does he now believe we can’t play both Alexis and Ozil in this set-up? Certainly something worth keeping an eye on. 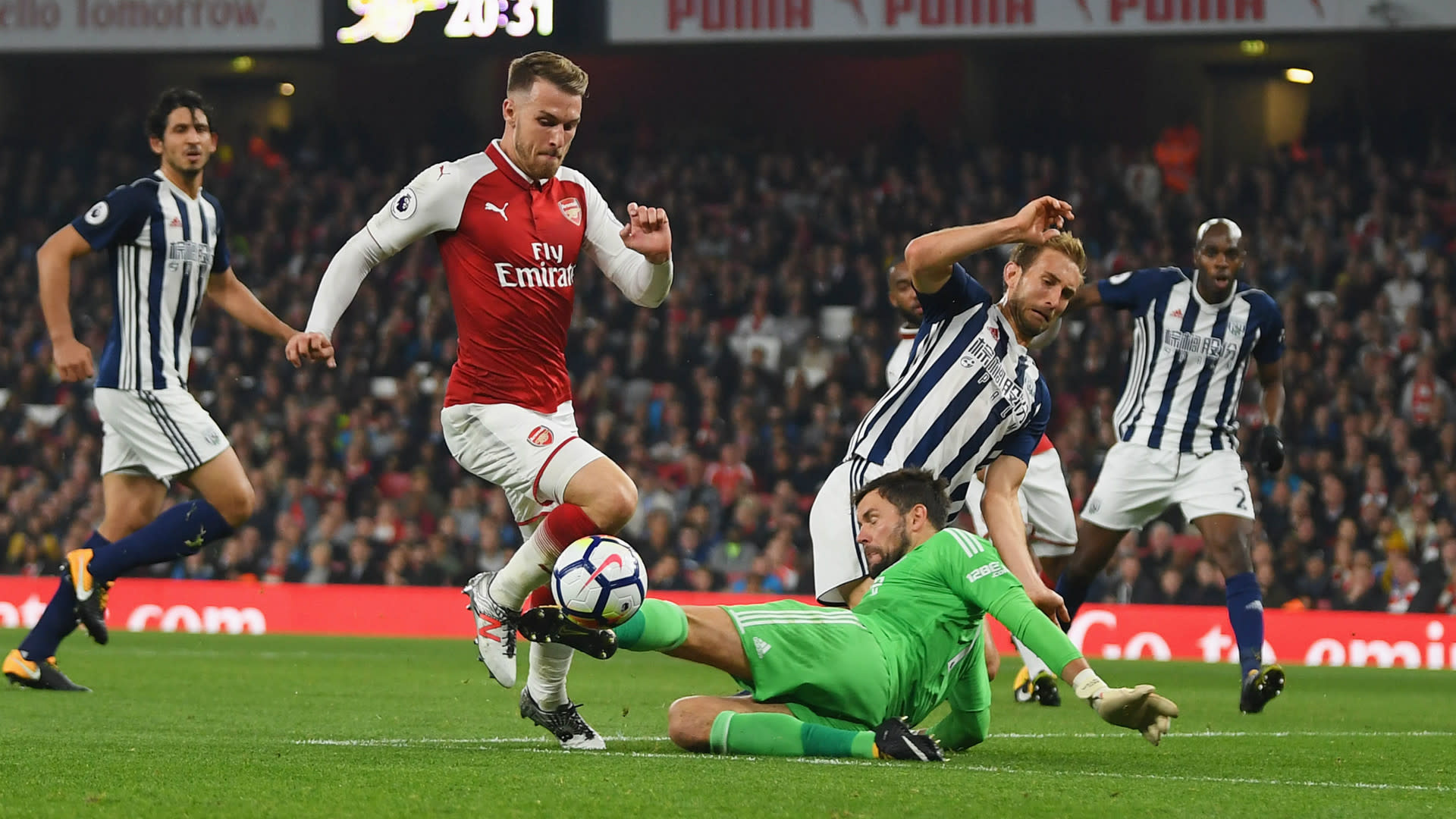 Has Ramsey usurped one of Alexis/Ozil?

The game was a much more open affair than I thought it would be. West Brom opted to press us high up the pitch, and we were not always comfortable with it. However it allowed for some quick transitions as soon as we got the ball back, and we could have gone ahead several times before we eventually did.

Pulis’ side posed more of a threat that I anticipated though. Madley played on when Mustafi brought down Rodriguez in the box, and only advantage saved us from a certain penalty. Rodriguez hit the post with a fierce low drive, one expertly tipped by Cech. Another passage of play closer to the first-half whistle saw Monreal clear a goal-bound effort from Krychowiak.

But the flipside of West Brom’s aggressive pressing was more room for Alexis, Ramsey and Lacazette. Had it not been for some poor decision-making from the Chilean, coupled with below-par passing, the gap at half-time could have been wider. However Alexis still deserves credit for his dangerous free-kicks, one of which Lacazette pounced on to give us the lead.

All in all, the first 45 minutes resembled a basketball game more than a football one, and I believe this made the game hugely enjoyable for neutrals.

Some good free-kicks on the night. That’s (mostly) all

Man of the match: Alexandre Lacazette

The Frenchman has become the first Arsenal player in almost 20 years to score in the first three home games. The last person to do this for the Gunners was Brian Marwood in 1998.

The manner in which Lacazette takes his chances is worth a separate mention though. In a word, Lacazette is a finisher. He is a fox-in-the-box, a poacher by nature, but his calmness in front of goal stands out. The Frenchman has put away his chances without batting an eyelid, and that is true for all his goals so far.

Sure, there have been some misses, even yesterday our number 9 could have had a hat-trick, however strikers will always miss chances. It’s how many they put away that counts – I have a feeling Lacazette found the back of the net with the majority of his gilt-edged chances.

I especially enjoyed his penalty. Firstly because he took the ball decisively and looked ready to strangle anyone who might have had other ideas about the designated penalty takers (I’m looking at you, Sanchez). Secondly, because the execution of the penalty itself was flawless. Foster guessed the corner right, but stood no chance regardless.

Lacazette is looking extremely good value for money with 4 goals in 6 games. I think we have found the clinical striker we’ve been looking for since RvP’s ignominious departure.

Someone have a word with Mustafi

The German once again exhibited some poor judgement yesterday. He was incredibly lucky not to concede a penalty early on, but the mistake which led to it is painfully familiar.

Shkodran was caught high up, sprinted back into position and then went to the floor in last-ditch attempt to stop Rodriguez. The West Brom forward saw through it, tucked away the ball, and the German only caught Rodriguez’ feet.

This propensity to throw himself into slide tackles has been a mainstay in Mustafi’s play and that’s something he needs to cut out asap. The forwards will eventually wise up to it and start looking for contact (the way they always do). Mustafi’s slide tackles have a tendency to look worse than they are (a bit like Xhaka’s) and you don’t need a rich imagination to see it leading to tons of penalties.

For now Wenger has shown little to indicate he is ready to move away from three at the back. This, coupled with Ramsey’s attacking nature, has created a problem earlier in the season: our opponents surpassed our midfield too easily. Xhaka is uncomfortable facing the goal, while Ramsey was frequently caught high up.

Yesterday, however, Wenger fixed that by introducing a more disciplined Elneny and pushing Ramsey in the ten position. This indicates awareness of the problem from the manager. He could easily have used Iwobi once again, especially after heaping praise on the Nigerian, but he didn’t.

AW could have stuck with Iwobi, but didn’t

Is it a long-term solution? I doubt that. Elneny, for better or for worse, appears a squad player, a utility guy to plug holes. Also, I’m not sure Wenger is sold on the idea of keeping one of Ozil/Alexis on the bench. Taken together, these two factors may well see Ramsey pushed back down as soon as this Sunday.

For the sake of this team’s overall balance I hope Wenger doesn’t do that, especially if he wants to persevere with 3 at the back. If keeping Ramsey higher means hurting an ego and giving Elneny/Wilshere more minutes, I’m all for it. We don’t know whether Alexis and Ozil will stay beyond this season. As such, we need to assume the worst and start preparing for life without them.

Another win and another clean sheet is bound to inject some confidence into this group. We have a kind run of games up until early November when we face Manchester City, capitalising on this opportunity is vital.

On top of that we have seen some encouraging performances over the last games. Monreal, Ramsey, Welbeck, Iwobi, Lacazette all showed how beneficial their presence and focus can be. We just to maintain it now, while hopefully Ozil and Alexis will kick into gear.

That’s it from me for now. Enjoy the win, and the misery it piled onto Tony Pulis. I’ll be back here with a Fantasy preview on Friday and the look-ahead to Brighton on Sunday.