We face Southampton in 4th round of the FA Cup today and will be looking to secure passage to round 5 for the 17th time in 21 years.

Southampton have become something of a bogey team for us. We have only managed to beat the Saints four times from 11 attempts since their promotion in 2012. Two of those were ‘only just’ wins in December 2014 (thanks, Alexis!) and this season (thanks, Santi!). While our meek surrenders at St. Mary’s (one effectively ended Szczesny’s career at Arsenal) and that 4-0 thrashing last season will live long and painfully in the memory.

I wonder if there’s a mental hurdle of some kind we’ve developed against Southampton in recent seasons. I mean, Arsenal can fail to turn up against pretty much any team, but the regularity with which they did so vs Southampton is alarming, even more so considering Soton are no big club.

However every new game is a chance at redemption and I hope we snatch ours today. Let’s look at the players who can help us achieve that.

I’ll start with the potentially most damaging bit: Arsene Wenger won’t be able to oversee his team’s displays from the touchline for the next four games starting today which leaves the team in the capable hands of Bouldie. He was handed a ban by the FA for pushing Anthony Taylor and apparently calling Jonathan Dross names, for which I think of putting the big man on my wallpaper.

Frankly, I’m appalled at this decision. While Wenger overstepped the line, we’ve seen much worse behavior being punished less severely. I’m almost certain ridiculous articles from the media suggesting Arsene gets 8- or 10-game bans played a part in this farce. All of this allows the ineptness of Dross and Taylor to slip under the radar, while it should be the main focus of the FA, or at least the PGMOL.

I can go on, but I don’t want to make this piece about incompetent refs and diabolical official bodies tasked with overseeing the game’s development. Apart from Arsene we also lose Xhaka for four games. Santi is still not in training, while Egypt’s win over Ghana booked them a place in the AFCON quarter-finals, leaving us without Elneny that much longer. 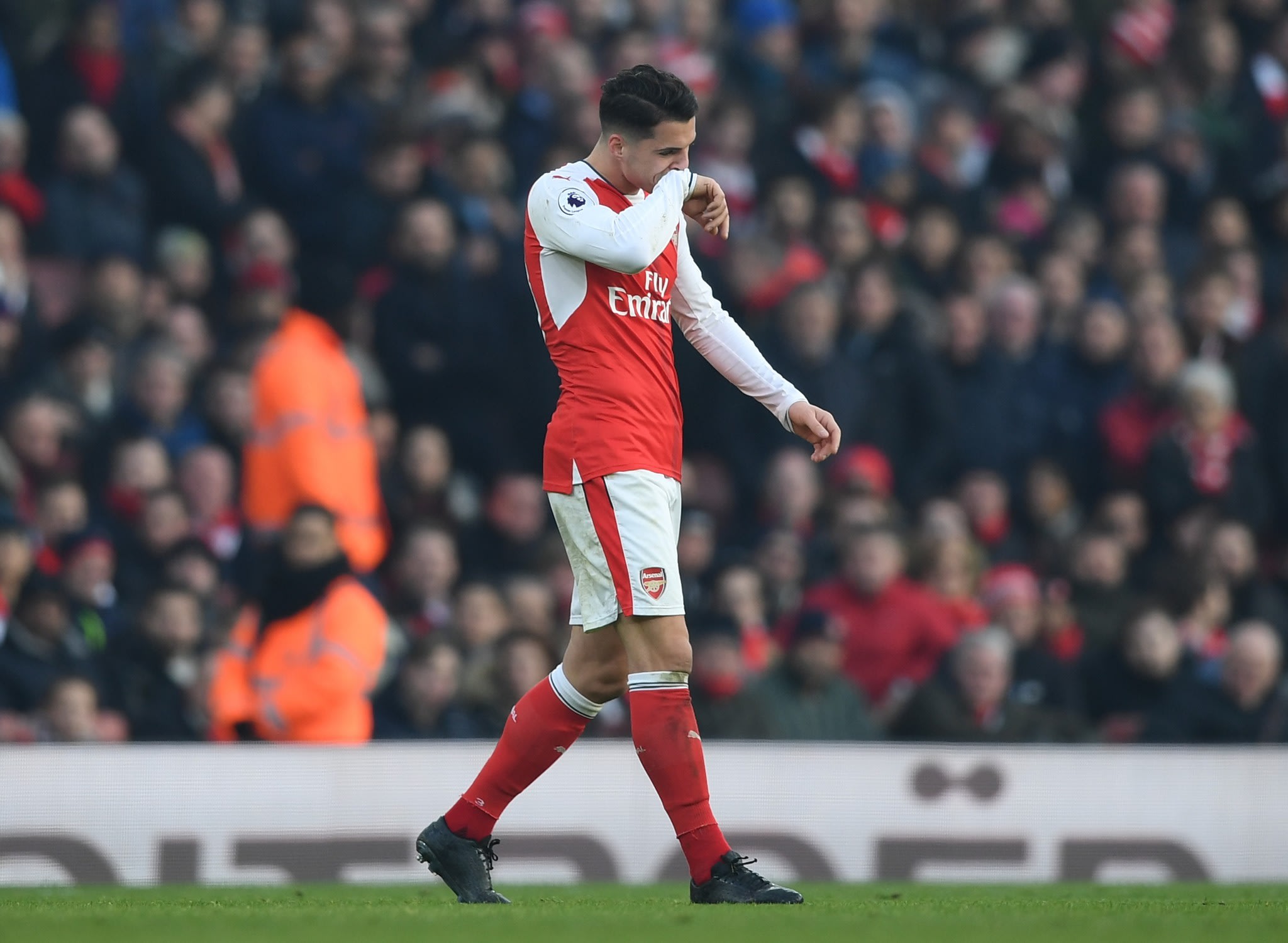 Xhaka’s suspension leaves us in a tight spot

But apart from that, we seem to have a pretty clean bill of health:

“We have Theo Walcott back in the squad and of course we lose Granit Xhaka because he will be suspended. Mohamed Elneny is at the Africa Cup of Nations and that’s it. The good news is that Per Mertesacker and Mathieu Debuchy are back in full training from Friday, so the squad is quite big, but we are a bit short in midfield at the moment.” – Arsene Wenger

Even if Per and Debuchy were ready to be included in the squad (which I don’t think they are), there’s a chance they wouldn’t have because of the high level of competition in defence. Debuchy certainly wouldn’t. In other words, these two aren’t vital for us right now.

‘First-team experience’ is not the same as ‘strongest team possible’, while the ‘one or two younger players’ bit has me thinking about Holding and Iwobi in the first place. Maybe with a touch of Jeff and AMN on the bench, especially considering our light midfield, but I’m hesitant here.

Will Holding get another shot at Southampton?

Most likely a healthy dose of rotation will take place. I think we’ll see Ospina, Holding, Gibbs, Perez, Ox and Welbeck all handed starting spots. The big guns (Ozil and Alexis) will either be on the bench or omitted completely from the squad.

What worries me is our midfield. Removing Ozil from the equation leaves us scrambling for options indeed. That makes me think of last year’s approach to cup games, when Arsene played three in midfield. Pretty sure one of the three was Ox!

I wonder whether the sensible thing to do is re-visit this experiment. A trio of Coquelin, Iwobi and Ramsey/Ox can potentially work. If not, I think the second most sensible thing is playing Iwobi deeper with Coq and Ramsey under the striker. We need a bit of passing security in midfield, I’m not sure Ramsey can provide that on the Xhaka/Cazorla scale.

As for the front three, Welbeck is due a start at some point, a cup game seems a good enough time to give him that. Lucas and Ox have also struggled to get minutes recently, though for different reasons I suspect, so I wouldn’t be surprised to see both line up from the off.

Dat Guy to spearhead the Gunners?

Southampton have proved to be a dangerous team this season once again. A bit of giant-slayer if you like. They had their dips, losing to United and us early on, then also losing to Chelsea and being taken apart by Tottenham, but Puel’s men also claimed the scalps of Liverpool (twice), knocked points off Manchester City at the Etihad and comprehensively outplaying us in the League Cup. They are not be underestimated, certainly not by the Gunners but I do feel that the pace and trickery of Ox, Perez and Welbeck will be too much for a Saints back ,line deprived of their  leader, van Dijk.

All that being said, I do believe (as I always do) that we have a squad with enough quality players to get a win. Our midfield remains a worry, but that’s the situation we got ourselves into ever since Cazorla’s long-term absence was confirmed. We couldn’t realistically expect Xhaka to play every game since October till May. I’m surprised we didn’t try to at least get somebody on loan this month, but there you go.

Anyway, it is what it is. All we can do is get behind the team and the current players and have faith in their ability. So come on you Gunners. Rip Soton a new one.

Back here to review the game.

Time for Arsenal to end their First-Leg Trouble in Champions League
Forget SAS, The Arsenal Future might be WAW – Saints 0 – Arsenal 5

One Response to Bould Arsenal will unleash a Front 3 of Ox, Welbz and Lucas against van Dijkless Saints