Thriving in adverse environment is sometimes made possible by the siege mentality. It’s the world against you, so will you put your hands up and surrender or will you mount a fightback? It’s a very simple notion, one that can be encapsulated in a phrase: “sod everyone, I will do it”.

Arsenal took the latter route yesterday. Under pressure to beat a top 6 rival, fuelled by the desire to right the wrongs of two weeks ago, attacked from all sides by journalists and experts, most of whom were quick to write the Gunners off, Arsene Wenger’s team stuck two fingers up to everyone. I enjoyed it immensely.

I keep repeating that Arsenal don’t get lucky bounces, or at least they do so in exceedingly few cases, not even worth a mention for their sparsity. Yesterday’s win was a demonstration of everything good about getting what you deserve. The Gunners were chomping at the bit from the off, from the very first minutes, and this energetic approach stunned and stifled Spurs.

Not that there was much to stifle. You probably remember just how much I was fuming pre-game with the amount of BS Pochettino got away with regarding sending his players on international duty. I called for divine justice to restore balance to this world. God must have heard me.

All of Lloris, Vorm, Vertonghen, Alli, Winks and Kane made the squad. Only Vorm and Winks were on the bench. However that didn’t disturb the excellent Gunners whatsoever. None of the Spurs attacking players could make any difference to the proceedings. The sight of Alli and Kane being hauled off with 15 minutes to go, soaked and miserable, made my joy complete. Alli did try to dive his way into the game, of course, though his attempts still faded with that of Vertonghen’s early on, when the Belgian crumbled upon the slightest of touches from Ozil.

I also have to give Arsene Wenger the credit for that win. I said I thought he was prepping a plan to nullify Spurs, and he did just that. The Gunners looked to ride the wave for the opening 20 minutes or so of each half, before springing to life. Pochettino’s words about Spurs being the better team before they conceded are still wide off the mark though. Arsenal’s created 5 decent scoring opportunities to Spurs’ 3 in the opening half an hour. We definitely should have gone ahead earlier, when Ozil beat Vertonghen, whose response was to dive and Dean bought into it.

Let’s stop on some key figures as usual, shall we?

The return of Shkodran

I thought Wenger might spring a surprise before the game, though Welbeck seemed a more obvious ‘jack-in-the-box’ to me. I was half-hoping Giroud could make the bench to everyone’s surprise, but it wasn’t meant to be for the Frenchman.

However Arsene went with Mustafi as the unexpected starter, delegating Mertesacker to the bench and omitting Holding entirely. It is fair to say Mustafi had a blinder. He scored the all-important opening goal with a sublime header and he absolutely bossed Harry Kane. Shkodran made 14 clearances (led both teams), 2 interceptions (only Kos and Monreal made more for Arsenal) and, while only one blocked shot doesn’t seem like a big deal out of context, odds are you probably remember that one block. Which says a lot about its importance.

Mustafi looked considerably better since being moved into the centre of the back three. While undoubtedly capable of more front-footed defending, a more reserved role allowed him to develop a better sense of anticipation and positioning, creating room to cut out most of those desperate lunges to make up the lost ground. I feel much safer with Koscielny and Monreal playing on the sides, because both are more experienced and simply quite excellent at active defending while staying on their feet. Our captain and the Spaniard made a total of 10 interceptions yesterday, at 4 and 6 respectively, to showcase their prowess. 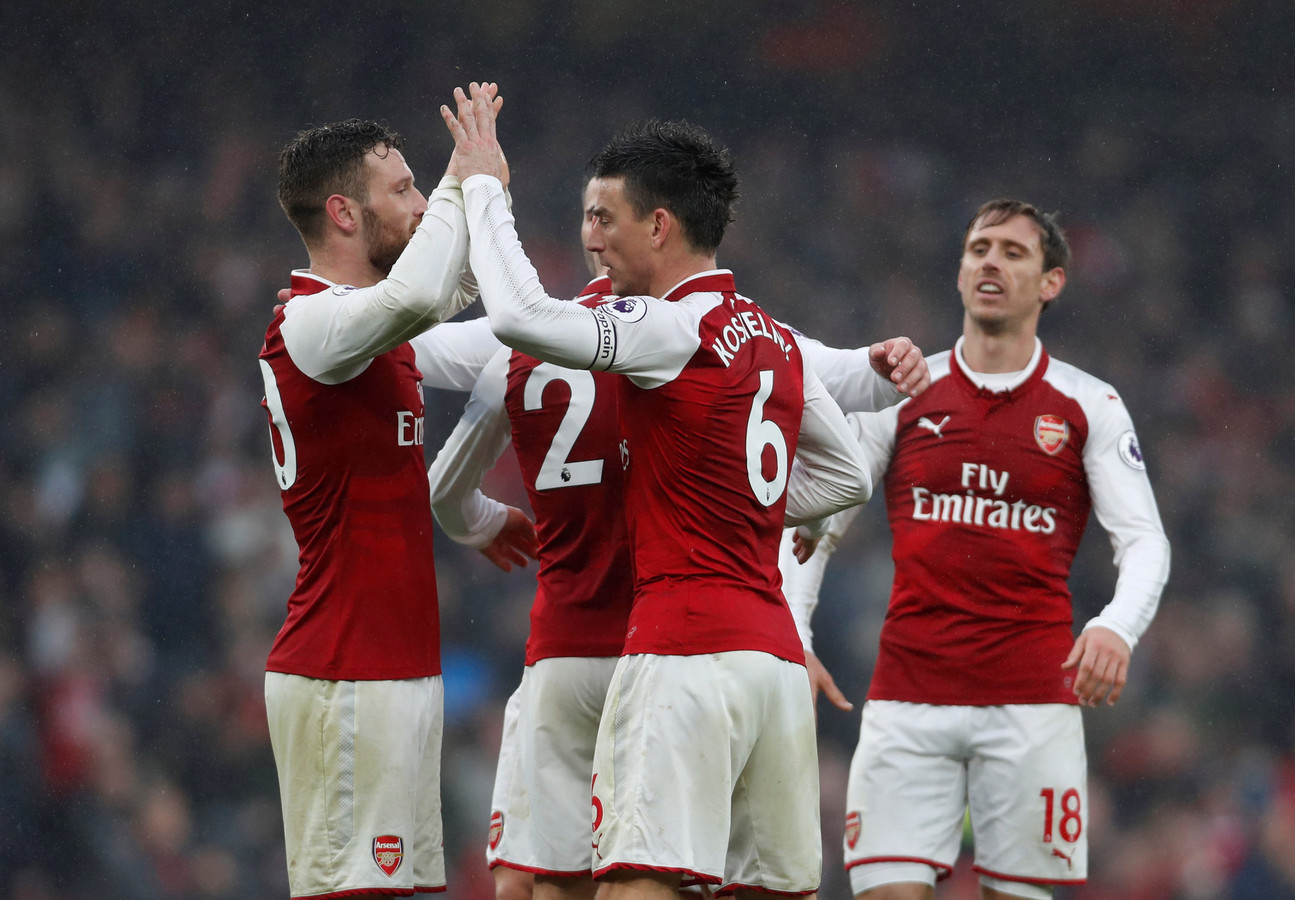 “Explosive” is probably not the first word that comes to your mind when describing Mesut Ozil. It is generally a much better term for Alexis Sanchez. However it definitely applies to both of them for the game yesterday, as 7amkickoff points out in his “By The Numbers” column:

And we did look good value for a third goal in the last half an hour. Logic dictates the losing team piles up the pressure closer to the end of the game, but Spurs looked absolutely unable to do that. Barring a well-saved shot from Dier and a really, really late effort by Son (deflected by the omnipresent Mustafi), Pochettino’s side looked defeated long before the whistle went.

Arsenal, meanwhile, exploited the spaces left behind by pushing Spurs defenders to create enough for three of four more goals. Had Alexis been a bit better in his decision-making re the final shot, or had Iwobi put his effort on target, we would have run out as even more comfortable winners.

There were suggestions both Mustafi and Lacazette were offside for the goal and the assist respectively. I’m having none of that.

By this I mean I’m not sure either were offside, but I can’t give a flying f*ck even if they were. Two weeks ago we have been robbed blind by a soft pen and an offside goal. Richarlison’s dive cost us dearly before that. Lacazette had his goal against Stoke taken away by a linesman doing guesswork rather than spotting an actual rule breach. And I won’t even start on how many offside goals United tend to score.

We have been told it all evens out in the end, that refereeing mistakes go around and come around. If Dean made some yesterday to benefit us, then here you go. A slice of luck we were long overdue. And just like pointing to our goals, Pochettino and pundits could have pointed to Davinson Sanchez’ foul being a red card offence (last man standing) or Dean waving off a legitimate penalty claim from Lacazette.

But none of them did that. None of them brought up their “evens out eventually” argument. Because it simply doesn’t suit their narrative, however much they like to pretend there isn’t one, or convince us in their unbiased and objective type of analysis. Well, I have a special finger on my hand for you, guys.

Sorted. No need to thank me. pic.twitter.com/O0zMiezleD

It has been a while since we’ve won a North London derby, and gosh does it feel good. We have once again demonstrated tactical maturity, while adding a burning desire to win from the off. Add the two together and we didn’t even have to open the box named “resolve to mount a comeback”.

This win puts us a point behind Pochettino’s side, though incredibly we are still 5th, level with 6th Burnley! That is down to the simple fact all of City, United, Chelsea, Pool and Burnley won yesterday.

Next week however Pool are facing Chelsea, while we visit Turf Moore, so there will definitely be potential to both close the gap on the top four and put some distance between us and well… Burnley. Hopefully Huddersfield can rediscover the magic that helped them beat United and pull off another surprising result against Spurs.

Until then we can all just enjoy a colossal win and a substantial statement it carries, while laughing at the pundits and media as they fall over themselves in their significant backtracking. Ah the smell of victory.

Have a great one, guys.

One Response to Mustafi and Ozil steal the show as Arsenal put Spurs to the sword: #AFC2Spurs0