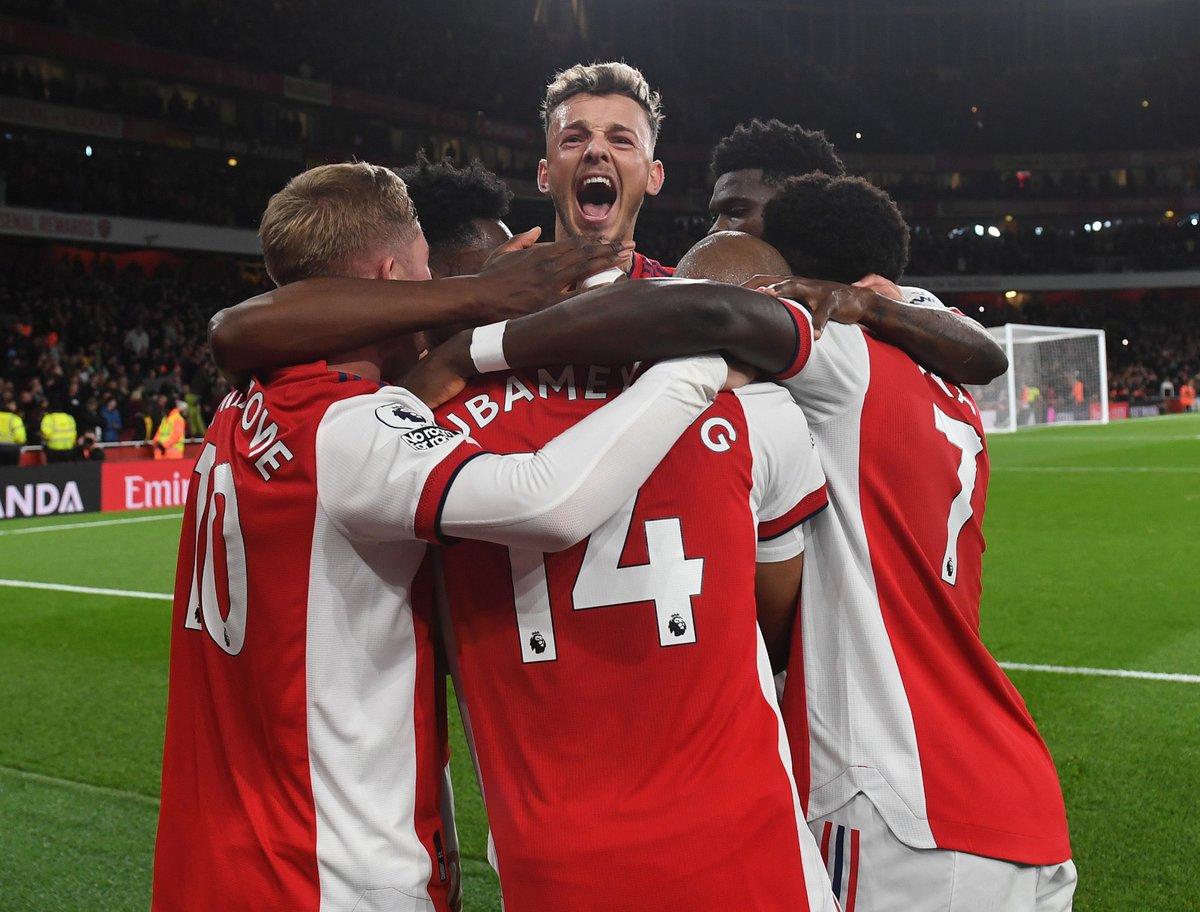 To say it’s been a turbulent start to the 2021/2022 Premier League season for Arsenal is an understatement.

A combination of below-par performances and abject results have left Gooners incredibly frustrated with the manager’s tactical decisions.

Mitigating circumstances were present in the opening day fixture at Brentford as the unavailability of Gabriel Magalhaes, Thomas Partey and senior strikers Pierre-Emerick Aubameyang and Alexandre Lacazette was always going to have a detrimental effect on performance levels.

But nevertheless, the lack of central compactness achieved along with the inability to set the team up accordingly to deal with transitions lies with the coach.

A tough home encounter against the Champions of Europe was next in line, with the north Londoners yet again missing crucial first-team starters who are tailored to the style of football Mikel Arteta demands.

To expect any sort of result was unrealistic, but deviating away from principles that brought success away at Stamford Bridge last season was rather baffling.

Previously in Arsenal’s dogged 1-0 win against the Blues, Arteta went like for like system-wise with a 3-4-3, which helped nullify the frequency of chances Chelsea could create from out wide.

But instead, he chose a back four, which proved to be the wrong approach as Thomas Tuchel’s men regularly isolated Kieran Tierney with the Reece James and Mason Mount dynamic, with both Chelsea goals originating from their attackers infiltrating spaces presented to them within the left flank.

Performances against Manchester City, Brighton and Crystal Palace were also underwhelming, particularly the latter, with Arteta yet again overcomplicating matters.

Throughout the first half, the former Gunners captain utilised a 4-3-3 and whilst similarities between this formation and the 4-2-3-1 are evident, the zones certain players took up were somewhat strange.

Usually, Tierney operates as a winger in possession, tasked with occupying the width and delivering quality in advanced areas, but instead, he was instructed to remain conservative and aid the build-up phase.

An understandable idea but given the 24-year-old’s strongest assets lies inside the final third, handing him the responsibility of dictating play from deep isn’t wise since the former Celtic man fails to offer composure under pressure, often blasting a long pass into no man’s land, thereby conceding possession far too easily.

Furthermore, the use of inverted fullbacks in the 2-3-5 shape negatively impacted Ghanaian destroyer Partey, who had a night to forget.

Whilst the former Atletico Madrid enforcer is capable of acting as the anchor, setting up with a double pivot brings the best out of the 28-year-old since he’s given greater freedom to influence proceedings at both ends of the pitch.

Yes on paper it’s a pleasing formation on the eye, but when considering the fact that it mitigates the qualities of key individuals, the 4-3-3 fails to offer sustainability.

Arsenal’s stalemate at home to Patrick Vieira’s Eagles resulted in an increase in fan pressure on Arteta, with uncertainty surrounding the tactical fundamentals he would deploy against Aston Villa.

Questionable decisions were made, particularly with selecting both Aubameyang and Lacazette in the same lineup, since balance is impeded when the former is shifted onto the left, as an inside forward.

But to the delight of many, the two were operating within close proximity to each other and without a shadow of a doubt, it proved to be an excellent decision as the Gunners dominated all phases of play.

An organised press, excellent fluidity in build-up, aggression in duels and an abundance of creativity – there were a plethora of aspects to admire in Arsenal’s performance and it seemed that the hybrid 4-2-3-1/4-4-2 system provided the platform for many to flourish.

Surprisingly it was the first time in which Arteta opted for a two striker system in his Arsenal managerial career.

Under Unai Emery’s stewardship, both Aubameyang and Lacazette showcased excellent efficiency in a lethal striking partnership, bagging an impressive 32 league goals between them in the 2018/2019 season, so evidence of the duo producing consistent desirable output is significant.

Goals have come at a minimum for Arsenal this season, so the idea of starting the two together within the frontline made sense.

The principles in build-up were fairly similar to what Arteta regularly persists with, although the 3-4-3 pressing shape Villa used forced the Spaniard into making minor changes.

Instead of the typical 3-2-2-3 structure predominately utilised, Arsenal built passages of play out from the back in a 2-4-4 shape, in order to bypass the three Villa forwards (Danny Ings, Ollie Watkins and Emiliano Buendia) and the midfield four (Matty Cash, Douglas Luiz, John McGinn and Matt Targett).

Full-backs Takehiro Tomiyasu and Nuno Tavares occupied the width and their positions enabled Partey and Sambi Lokonga to form a pivot, which ensured greater balance was established.

Recently, Lokonga has been tasked with covering the space vacated by the left-back, but clearly, it’s a role that doesn’t suit the youngster simply because the former Anderlecht prospect is very dominant with his right foot.

But what can be seen is Lacazette dropping deep within the right half-space consistently to act as a reference point, whilst Smith Rowe tucked inside once Tavares advanced forward and maintained natural width through the left.

Arsenal’s number 9 was effective in dragging Tyrone Mings into areas he simply didn’t want to be in, which enabled spaces to open up for nearby teammates.

Certainly, this is an aspect Lacazette thrives in and his ability to maintain technical security in possession ensured attacks were sustained.

The final third structure consisted of a 2-3-5, with the front five clearly displayed in the following frame.

With Lacazette regularly operating a 10 in order to facilitate progression and ensure the transition from defence to attack was quick, once the ball entered the final third, the £50 million centre forward joined Aubameyang in the centre.

Arguably, the standout aspect in Arsenal’s performance was the structure and organisation in their press.

Villa players along the backline and midfield struggled to access the final third, leaving strikers Watkins and Ings isolated.

Lacazette was showered with praise in the way he conducted himself on the ball, but out of possession, he was just as good in man-marking Douglas Luiz.

Shown below is Arsenal’s 3-4-1-2 shape when Villa players received the ball deep within their own half, and what’s clearly visible is Lacazette staying touch tight to Luiz, preventing the Brazilian from having time and space in possession, with the second frame illustrating how sharp and aggressive the former Lyon striker was whenever Luiz received the ball.

The passing lane from the three central defenders into Luiz’s feet was regularly eliminated, meaning that the only way in which the visitors could progress forward was by moving towards the flanks, but Arsenal were alert to this scenario and set traps.

The two diagrams below highlights one of many examples where Arsenal would frequently regain control by winning the ball back on the halfway line.

Initially, both Saka and Aubameyang applied pressure on Mings and Axel Tuanzebe, which resulted in the ball being shifted towards the flank.

Smith Rowe blocked the pass that could be played into the feet of Konsa and Cash was occupied by Tavares, meaning that Tuanzebe had no other option but to deliver an aerial ball into Ings’ path.

But with Gabriel using his commanding stature and physicality to his advantage, the Brazilian wins the duel and ensures possession is regained.

It was a constant pattern throughout the game where the two central defenders and the midfield pairing of Partey and Lokonga would effectively operate in a 2-2 box, thereby increasing the likelihood of winning both first and second balls.

It was the key to chance creation since it allowed Arsenal to spend prolonged periods within the final third, which allowed the frontline to peg the Villa backline in their own box and create chances at will.

The north London derby victory was terrific, but there is a strong case to suggest that the performance delivered on Friday night was far more complete, and it seems Arteta now has a plan A and B.

Smith Rowe and Odegaard roaming between the lines, with Aubameyang acting as the focal point in a 4-2-3-1 seems to be the preferred system.

But selecting Lacazette in place of Odegaard and instructing the Frenchman hold the ball up, with Aubamayeng making runs in behind centrally is an internal solution that can increase attacking potency.

The approach Arteta adopts should depend on the opposition and game state, but given the promising form Lacazette is showing, and the fact that Leicester will operate with a similar system to Aston Villa, the hybrid 4-2-3-1/4-4-2 should be utilised again.