In what was one of my first articles for GunnersTown (back in March) I argued we need a winger. The idea wasn’t greeted with open arms back then: I was pointed out we have Oxlade, Alexis, Walcott and Welbeck. 4 players for two positions is a balanced and healthy squad, right? Not exactly.

Fast-forward five months and our situation doesn’t look comfortable anymore. Podolski has left, Campbell is on the verge of following the German out of the door. Gnabry is on loan at West Bromwich, Cazorla proved he is not efficient on the flank. We still have 4 aforementioned players, though we could easily have lost Walcott. No one was sure he’d sign till he actually signed.

However, the situation is still precarious, despite us retaining Theo’s services. Firstly, because Arsene now seems to view Walcott as a striker, not a winger. I agree with the Frenchman here: I feel we are better suited to both play to Walcott’s strengths and compensate for his weaknesses when the Englishman spearheads our attack. Secondly, Welbeck is injured and no one can put a return date on him.

Where does it leave us? That’s right, ladies and gentlemen, we have two wingers at the moment of speaking: Alexis and Oxlade. While I have no qualms with either, surely two players for two positions is far from an ideal scenario? 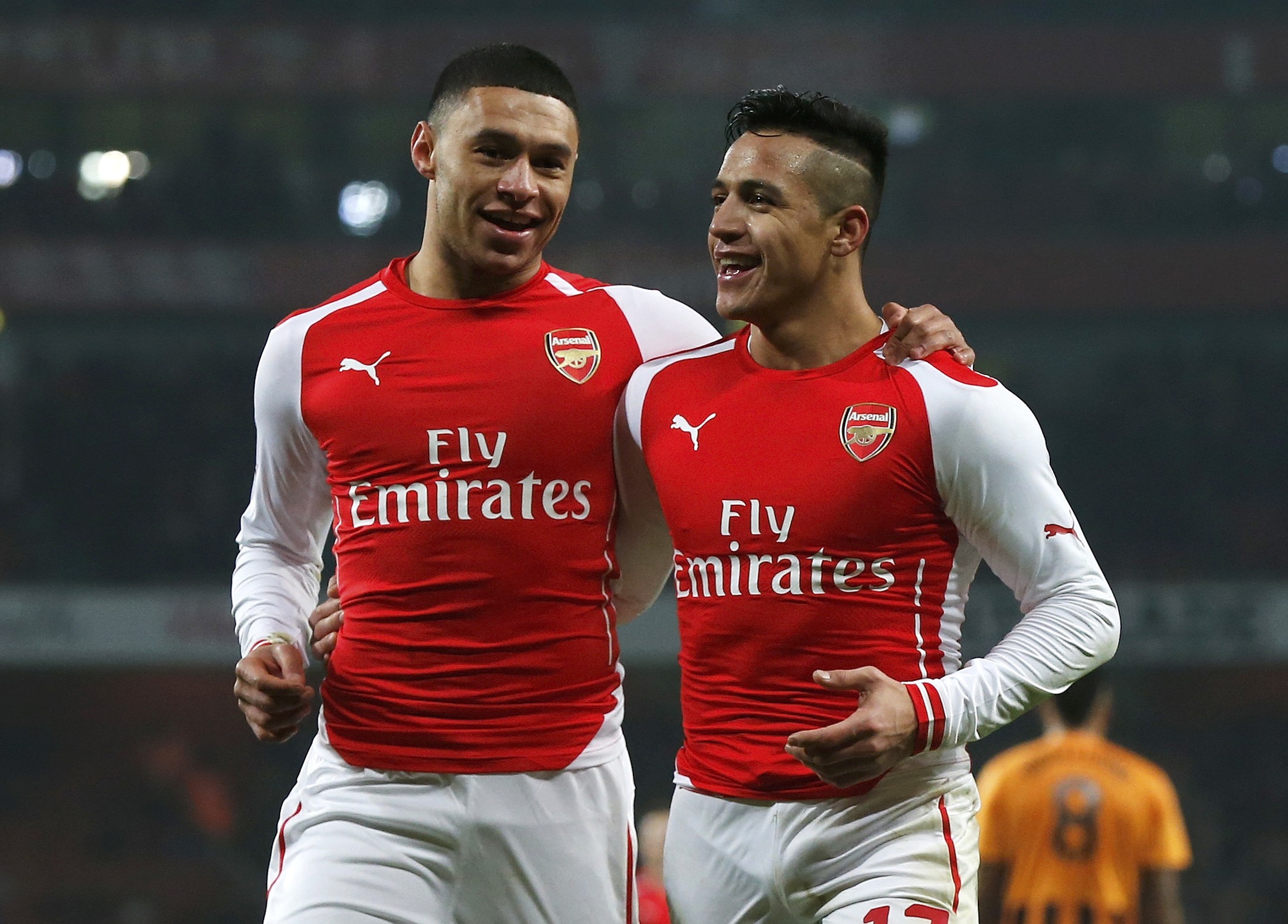 Our only real (and healthy) wingers

The curious case of Aaron Ramsey

Ah, yes. I’m not sure Aaron featured on the right prior to my article in March, that’s why I haven’t mentioned him there. I’m pretty certain I wouldn’t have done it even if Rambo played there: he’s still a central midfielder, a box-to-box and only plays on the right to plug the hole.

Well, not really. He also plays there for ball retention and backtracking purposes. While it wasn’t the main point of my fellow writer’s article, Omar presented us with a curious example: as a student he was often asked to play on the wing despite not possessing the pace and agility to beat a man. Why was that? He was a good distributor and helped keep the ball in circulation, something that was highly valued in the team’s set-up.

But back to Ramsey. He is a team player, first and foremost. He will plug any hole that needs plugging: against Palace he played in three different positions: right wing, central midfield and at 10. I remember he even played right-back a couple of seasons ago.

However, that doesn’t make him a winger. Like our friend Omar, Rambo doesn’t possess the speed or trickery to be a traditional winger like Ox. It has nothing to do with manager’s instructions (after the Palace game Rambo admitted it was Wenger who told him to cut inside and find space between the lines). A player has a set of skills and Rambo’s set is not one of a winger. He may grow to become a wide player in time, as Dave argues here, however, we are dealing with here and now.

It doesn’t mean we won’t see him in this position. I’m certain we will. Though a handful of games is not really much to go by in terms of making a definitive judgement, it looks like Wenger will pick Ramsey for tough away games on the flank. There Ramsey’s positional discipline, work rate, ball retention and willingness to help out Bellerin can be invaluable.

We still need natural width, though

Why? Because we will play a lot of games at home. When we play at the Emirates, almost all teams (with the exceptions of City and probably Liverpool) will sit back and soak up the pressure. They will congest the midfield to try and stop Ozil and Cazorla from doing their job and we’ll thus be forced to stretch play. Ramsey is not the man here.

Not convinced? Look at the end of last season. Ramsey made his debut as a right winger on April 4th, against Liverpool. Either such a decision carried a surprise factor to it or simply because Liverpool played only three men at the back, it worked. But it almost never did after that game, especially in home matches. We played three more home games in the league after that and scored a grand total of 0 goals. That was as much down to poor finishing, as it was down to teams stifling us in the middle of the park, something we couldn’t address as Ramsey kept shifting inside to add to an already crowded midfield.

It wasn’t much better in away games either. We struggled against Burnley, Reading and United, scoring just 4 goals. The only exceptions were Hull away, West Brom at home (where Wilshere played on the right) and the cup final. So Ramsey had 3 good performances out of 9 possible.

The return of the Ox simplified things. However, unless he can play on the left, the situation is still not ideal. All our wingers (Alexis, Oxlade, Theo & Welbeck) are right-footed, which means the left winger will have a natural tendency to cut inside on his strong foot, no matter the manager’s orders.

If Oxlade can learn to play on the left without doing so, I think swapping him and Alexis will make sense. Thus Oxlade will be able to give us width on the left and Alexis on the right. Or the Chilean will continue to cut inside, but unlike on the left, he’ll have a more attacking-minded full-back to either overlap and provide width or put crosses into the box for Giroud’s or Sanchez’s benefit.

The Ox showed signs of ambidexterity when he scored against Chelsea, cutting in on his chocolate leg and cannoning a shot past Courtois, that’s why I think this idea of mine is not completely impossible.

Can Oxlade be as effective on the left flank?

However we will have problems with stretching play on the left if the Ox doesn’t adapt or, indeed, isn’t even given a chance to adapt (a likely scenario I think you’ll agree). Monreal is improving in offering himself as an outlet, however he is not even on Gibbs level, let alone Bellerin’s.

Where does it leave us? In need of a left-footed winger. Here Tim also makes a case for Wilshere on the left. Which is not out of realms of possibility either. Jack’s left-footed, a dribbler and it will be easier for him stay wide. Guess we’ll see.

However, this is also the part where I lament we weren’t apparently in for Pedro. He is not my first pick on the left, however he can play on the left, he is near ambidextrous (almost 40% of the shots he takes is with his left) and he is not overly expensive. I do hope Wenger has someone better up his sleeve. If a wide forward comes in, we’ll finally be able to see Alexis at centre-forward. Reus would be my personal pick. If he can stay wide, his left foot isn’t exactly chocolate – he takes 25% of his shots with it. Moreover, out of 16 goals Reus scored last year, he scored 7 with his left. That proves he is pretty comfortable with either leg.

Right, that’s it from me for now. Most likely back with a review

The Cherry On Top: new signings that would fill Arsenal’s squad gaps.
Simulation and Disrespect are rife in Football – Why so and what are the solutions?

2 Responses to Width to the rescue – Do Arsenal need a left winger? Reus they do!