How many times over the last few years have we read about misbehaving football players? Whether it is Luis Suarez, Mario Balotelli, Ashley Young or even the likes of Joey Barton, there are certain infamous personalities who make the headlines for all the wrong reasons, on and off the pitch. Granted that as long as we are human, there will always be characters like these (who are far from being the first), but there seems to be a worrying increase in bad behaviour during the course of a match.

Most recently is the Gerard Pique incident. The Barcelona defender reportedly verbally abused an assistant referee during the second leg of their Spanish Super Cup tie versus Athletic Bilbao saying “Me cago en tu puta madre” (I s**t on your w****e mother). But apart from the red card he received on the night, the 28 year old has only been handed a 4 match ban. Pique has since then apologised for the manner of his protests during the course of the game and the foul in question, but maintains that he never said what he is supposed to have. 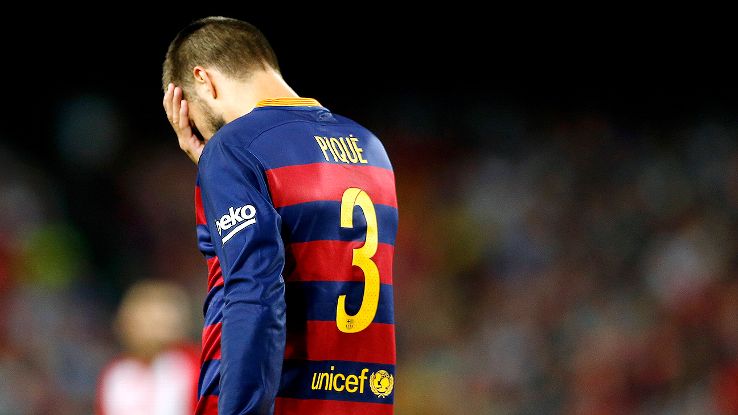 Pique sent of for fouled mouthed outburst but light punishment

Pique is not the only one accused of something like this and that is the worrying part. What is the root cause for this proliferating behaviour? Is it simply a case of youth becoming too rich too soon, an over-inflated sense of worth or an increasing lack of accountability for these actions? Or is the real problem a combination of many overlapping factors?

Let’s assume that it is linked to a place or a culture. There is a view that with more stringent measures and consequences in place, such occurrences of unsporting behaviour are rarer in American sports. But this runs into a roadblock with the first point we bring up – football is an international sport that cover the globe from South America and Europe to even Australia, Asia and to a large extent even the North American continent. Football is followed with deep and deeper passions, and hence one can argue for a collective “footballing” culture, but not a geographically specific one. As Ved Sen rightly points out, it is more about what the sport allows rather than a problem endemic in a country or city. Rugby, another extremely popular sport, has iron-clad rules about on-field conduct, going so far as to state that only captains are allowed to confer with the referee on the field. So does Gaelic football, where rule 5.14 of the playing rules states that “to use threatening or provocative language against an opponent is an immediately black card offence.”

There a few separate issues to be discussed here. Firstly, the lack of microphones on the referee like in rugby (so as to have a record of what is said) as well as the absence of retroactive punishments (except in really special cases). Secondly, the significant amount of on-pitch behaviour that is pardoned, goes unnoticed and unpunished; only encouraging more such actions. Thirdly, the rules around what constitutes punishable/carded offences during play being more often subjective than anything.

I recently read and reviewed a book for The Football Pink called Fathers of Football: Great Britons Who Took the Game to the World (Keith Baker). It was a very interesting book about the roots of football, the evolution of the sport and its introduction to different parts of the world by a core group of British gentlemen. There is an interesting discussion about the formation of the initial Sheffield rules followed by many clubs, the chalking up of the Cambridge rules and the eventual standardisation in 1863 when the Football Association (FA) was formed to agree upon a common set of rules and regulations. This guidebook of sorts was ideal for the travelling locals to take to foreign lands, and interestingly included many rules about fair-play, the kind of gentlemanly attitude to adopt and the spirit in which the sport was meant to be played.

If we look at how those rules have evolved, we realise that it hasn’t been that big a change when it comes to a sporting attitude or how a player should behave with match officials.

And yet players are increasingly play-acting, feigning injury, shirt-pulling, elbowing, diving/going down easily, time wasting with barely disguised impunity in order to draw a foul, get an opposition player sent off and/or receive a penalty. Not to mention many instances of rash tackles potentially ending careers, causing serious injuries or being lucky to not cause any trouble, where the rashness (clumsy or intentional) is brushed off as part of the game’s physicality. Players are not scared to surround the referee after a foul and try and influence him or almost pressurise him into making a decision in their favour. It doesn’t help that this sort of behaviour is mostly ignored or even encouraged by quite a few managers and fans, unless it is blatantly inappropriate. It is accepted as part of the game, one that much cannot be done about.

Players not afraid to surround Ref

One suggestion has been to give the match officials more power. But what guarantee is there that even they will always be right? We are all human after all and it is easy for even an experienced referee to get decisions wrong in such a fast sport, where any considerable break in play is not encouraged and where a lot of money and investment is riding on results and performance. There is a lot of pressure on referees to make quick decisions based on mostly circumstantial evidence. (Leading to a fair amount of wrong ones, most of which aren’t rectified later either) Many are also afraid of a backlash when it comes to particularly significant or difficult decisions. For example, how many times have you seen a referee hesitate to immediately caution a player already on a yellow? It has to be said that there is more awareness and penalising now where diving is concerned, but so many play-actors and actions still go unpunished.

The argument against video technology is that it would take away the fun, imperfect nature of the sport and the heated, passionate debates that linger for years to come. But I feel that retroactive disciplining at least would cut down on this burgeoning issue of gamesmanship being taken too far. Some of what is “taking it too far” is very obvious, while other parts of it will always be a grey moral area of sorts depending on the person you are discussing it with, but there is a reason why we see so few current players of true class as compared to the previous eras.

Sledging has always been a part of cricket, the self-titled gentleman’s game, but much of it has been practised in the right spirit, still upholding the values of the sport. Recently however there does seem to be a rising trend of bad-mouthing even here, causing the governing bodies to re-evaluate their strategies. Another sport mostly free of ill-conduct of players is tennis. My generation has been extra lucky to have witnessed not only the genius of a Federer or the grit of a Nadal and the athleticism of Djokovic, but it has also experienced their down-to-earth nature, their sportsmanship, friendly rivalry and dignity in defeat. Which is why the action taken to fine 19 year old Nick Kyrgios for his offensive comment about opponent Stan Wawrinka’s girlfriend is the right one. It is not just the money however, football can learn from the tour generally coming down hard on him to make it very clear that such behaviour will not be tolerated.

Kyriacos fined and rightly so

In a sport like football where this problem is a lot more wide-spread, one option could be for clubs to be held accountable for the behaviour of their players, in turn laying down the law for the same. The fines faced by the club should be passed on to the player, and irrespective of the suspension the players receive, there should be disciplinary action taken within the club. Unless there is a no-nonsense internal code of conduct for each club on top of stricter action taken by the governing bodies (FAs, UEFA, FIFA) and the player realises that any ill-conduct will not be tolerated, things will not improve.

In this modern era of football, there is an argument for players having it easier than their past counterparts when it comes to better training and playing facilities, more scientific methods for the same and for treating injuries and rehabilitation, an exorbitant amount of money etc. And yet, the attributes of fair play seem to be on the decline for a large part as well as how much gamesmanship is considered as fair game. There are also those who think that the footballers of today are a bit too soft when they exaggerate a knock/physical contact during the course of a match or go down too easily after a challenge. Both views are not completely wrong but the answer to this problem may not be as simple or could it be? Bobby Ghosh, who is a staunch supporter of the Blaugrana, certainly believes that all we need is someone to stand up and take charge.

“What it will take is a club (or a coach) to show principle and spine and crack down on this behaviour among its own players.”

As a sport, football is stubbornly resistant to change – a point succinctly put by none other than Andrea Pirlo in his book, ‘I Think Therefore I Play.’

“People hide behind tradition and try to keep things the way they’ve always been. They pretend they’ve forgotten we used to wear pointed studs and played with a ball that weighed a kilo.”

Whether it is a foray into video technology, a tougher approach to attitudes not in the true spirit of football, or the introduction of “sin-bins” (an ongoing debate) which is akin to the timeouts already present in sports like ice-hockey, we can all agree that without amends, the legacy of the sport we love so much will be poorer for the generations of fans to come.

“This piece is a true reflection of team effort, growing out and using a discussion on one of my football groups. Have to thank Ved Sen and Bobby Ghosh for their insightful contributions, may your tribe continue to grow – Tussi great ho!.”

Please join the debate – Thanks Anu

Anushree has three published short stories, including one on Amazon: “L’Effet De Papillon“. She is working on her first novel.

Width to the rescue – Do Arsenal need a left winger? Reus they do!
EXCLUSIVE – The Definitive Guide to be an Arsenal Fan during the Transfer Window