There are draws which feel like a point rescued and draws that feel like points dropped. Yesterday’s result falls into the second category for me for two reasons:

The reality is such that a draw was probably a fair result. Liverpool were much better in the opening 45 minutes, we dominated for the entirety of the second period. And yet a draw feels like an opportunity missed, for the reasons I listed above.

As always, I’ll go over the points of interest.

The big news before the game was the sudden unavailability of both Mertesacker and Koscielny. Mertesacker was struck down with illness, Koscielny is reported to have suffered a back injury. Neither made the bench.

That left us with Chambers and Gabriel as only viable options and I thanked heaven we now have 4 centre-backs. I also long since wanted to see these guys together in central defense, as I thought (still think, actually) that Calum and Gabriel are the future. I liked what I’ve seen from the duo in the cups last year and during pre-season. That being said, I was still worried that our recognised pair of central defenders was out before such an important game.

They rode into the sunset quite unexpectedly

My misgivings quickly turned into downright horror as I witnessed Coutinho, Benteke and Milner slice our defense open time and again during the first 45 minutes. There was nothing I wanted more than for Wenger to sub Chambers for Debuchy or Gibbs at half-time and shift the Frenchman or Monreal inside. I’m happy that Wenger didn’t do that, though he was tempted:

“You’re always tempted. I wondered whether I needed offensive players on the pitch. I knew that the most important thing for us was to get to half-time at 0-0. We knew the second half would be different.

He (Chambers) responded well. It was important for him. You sit there and you wonder how far he can go without losing competitive confidence. In the second half he did well. He’s a good footballer and he will come out of that stronger, with the belief that when he had difficult moments he can come out of it stronger.”

After the game I rushed to see Chambers’s stats and was surprised to see he had a 82% passing accuracy (40/49, only two passes misplaced in our third), made 2 interceptions and one tackle (out of two attempted). For comparison’s sake, Gabriel (who visibly looked more solid) was an 88% passer (43/49, one misplaced in our third), also made 2 interceptions, though had a 100% success tackle ratio with 4 completed. Both defenders were good with clearances (6/6 for Gabriel and 8/10 for Chambers) and in recovering the ball (11 recoveries for Gabriel and 6 for Chambers).

So why did Gabriel look more solid? I only have one explanation: Chambers ALLOWED his opponents more. Allowed to shoot, allowed to dribble past, lost positional battles. His struggles came from off-the-ball actions, thus it’s harder to measure exactly where Chamber came up short. 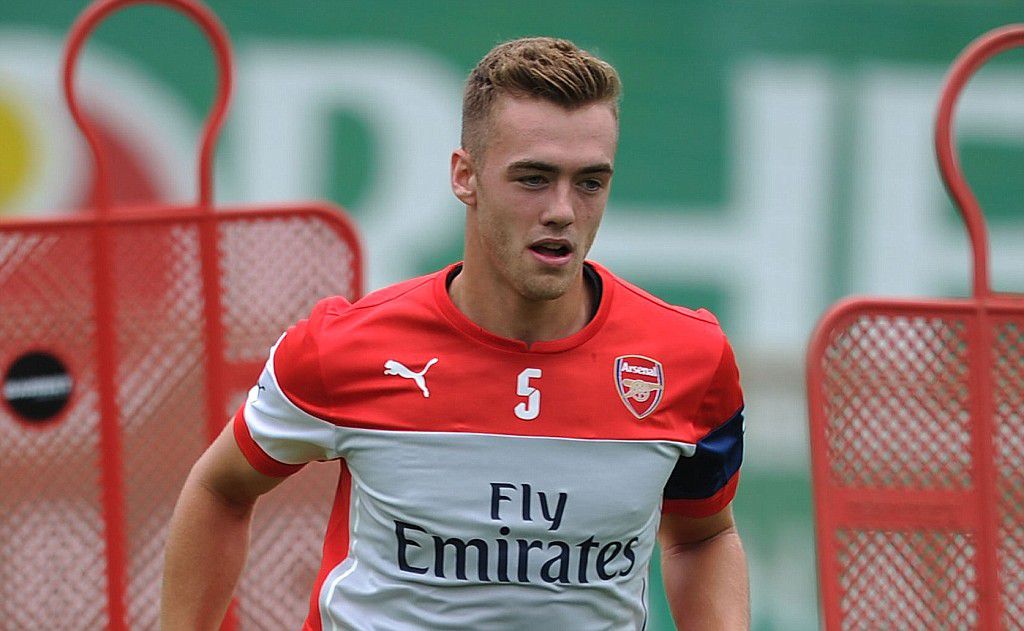 Calum had a torrid time against Benteke

Quite simply, Cech kept us in the game during the first half. Though the amount of saves he made is pretty evenly split between two halves (5 and 3 respectively), it’s the quality that counts. In the second half Cech was tested with two distance shots (Coutinho and Milner, I think) and one vicious attempt from Coutinho, which happened inside the box.

During the first half, however, only Benteke’s shot from a tight angle was a more or less routine save. The other four were nothing short of spectacular: quick reflexes to deny Milner at the near post, saving Benteke’s shot from point-blank range, parrying Firmino’s drive from the resulting corner and tipping Coutinho’s effort onto the post. Cech also claimed two crosses in that first half.

Overall, he was awarded MoM and, had it not been for a combination of bad luck/poor refereeing/atrocious finishing, Cech would have got us three points. As it stands, he rescued one.

In the eighth minute Cazorla treaded a fine through ball to Ramsey and the Welshman slotted it home from close range. I was already on my feet shouting “Goal!” when I saw the linesman’s offside flag up. An offside flag which shouldn’t have been up, as the replays showed: Ramsey was perfectly onside, the way Benteke was early in the game before Coutinho hit the bar.

We were robbed early on. I’m sure the goal would have changed the flow of the game, however it was incorrectly ruled out. We had 82 minutes to score another (plus added time), though. We didn’t do that, so people screaming themselves hoarse “we would have won had the goal stood” can go fuck themselves, because the offside goal wasn’t the sole reason we didn’t win.

No, Aaron, you weren’t offside even by this little

You know why I put them together despite most saying Alexis had a much better performance than the Frenchman? Because both were utterly wasteful in front of goal. Ramsey, who played on the wing despite not being a winger, had a much better performance in that regard, with 2 of his 3 shots hitting the target (both forced Mignolet into spectacular saves) and a disallowed goal.

Opta counted 2 big chances Arsenal squandered: Alexis hitting the post and Giroud testing Mignolet from 6 yards out. Both arguably should have been converted.

I counted a bazillion of missed big chances: Alexis failing to plant a header on target, Alexis fumbling a shot after he and Ozil pressed Lovren and Skrtel into a mistake, Giroud missing THREE chances at the near post (two blocked and one he didn’t even get a foot to). Makes it at least five on top of the two mentioned.

Yet when Theo came on, he was utterly useless. He disappeared for the whole 20 minutes and never resurfaced. No shots and ONE pass in 20+ minutes. One. Pass. It didn’t help in the slightest the teammates tried to cross the ball instead of keeping it on the ground, but ONE pass. For someone on 140k-per-week and aspirations to become a deadly striker, Theo has hugely underachieved.

Coquelin, the man, the myth, the legend. The DM, by the way

The only bright spark apart from Cech and Gabriel. Someone who was truly impressive on a night when most have been found wanting. In the 80 minutes he was on the pitch, Coquelin had an 91% pass accuracy (69/76, one misplaced in our third), he racked up 5 successful tackles (of 6 attempted), made 5 interceptions and recovered the ball a whooping 15 times. Something which amasses to roughly 17% of total ball recoveries Arsenal made (80). In short, Coquelin once again proved he is that beasty DM Arsenal fans vied for.

And you know how some fans reacted to this monumental performance? By calling Coquelin a bad passer, a braindead sweeper and demanding the immediate acquisition of a new Arteta (with legs), so that we could play Ramsey alongside that shiny new DM (who isn’t actually a DM, because Arteta is not) in order to liberate the Welshman. That’s despite a fine display from Aaron and actual proof Coquelin doesn’t in any way hinder Ramsey’s game. Just how stupid and ungrateful can some people get?

The man, the beast, the legend

It was a tale of two halves, a tale with a rather disappointing end to it. We had a lot of chances we didn’t take that we really should have. I haven’t even mentioned  how we could have scored in the dying seconds, only for Skrtel to scythe his clearance just wide of the post. Mignolet parrying Ox’s fine low drive and Gabriel heading over from a resulting corner.

We now have 4 points in three games, with only one goal scored (and one own goal, remember?). Our recent home form is also far from encouraging: 1 point out of 6 possible, no goals scored. If we extend it to the last season, the picture will become ugly indeed: 1 win in 6 games (West Brom), 4 goals scored (all against West Brom!) and a meagre return of 6 points out of 18. Worrying.

We now have a week to recoup, get at least one of Mertesacker/Koscielny back (both is better), conclude our transfer business (unless we want to conclude it on 30th and 31st) and prepare mentally that nothing but a win against Newcastle will do. Here’s hoping we’ll do just that.

Defending Ollie: He’s not the best of the best, but the best we can afford.
Wisdom of “The Dutch Master” holds the key to Gunners misfiring attack