It’s always refreshing to write something about Arsenal after we’ve had a couple of good results. While I am long past the stage where an Arsenal defeat will ruin the next few days, the constant supply of ‘Arsenal-bashing’ via papers, blogs, YouTube and horrible Chelsea fans means you end up getting caught up in the negativity. All the doom and gloom from Arsenal fans is perfectly understandable given our form since the turn of the year but Chelsea fans harping on about Arsenal? When you sack a manager who won the title, announced a new manager for next year who is facing charges of ‘sports fraud’ and sit 10th in the table, I’d say its high time for some self-reflection and less of the Arsenal obsession. 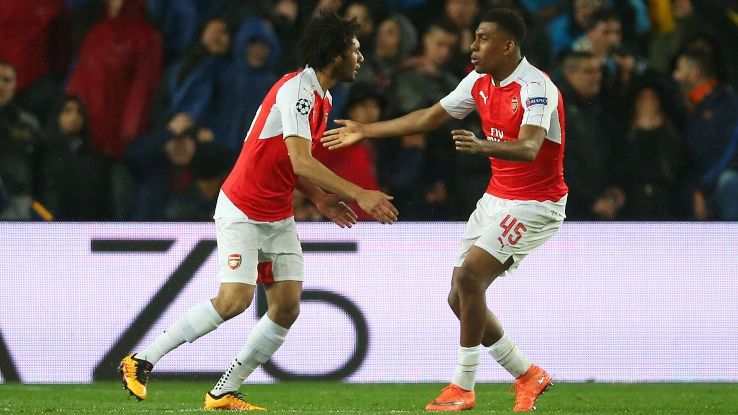 On to Arsenal, the 4-0 win against Watford and Tottenham’s draw against Liverpool means we are right on their tails. Wenger has identified a team that finally looks balanced and as I said in my previous post, the key to that has been the introduction of Iwobi and Elneny. The inherent shakiness in defence remains but we look so much better in possession and as a result, we aren’t losing the ball in dangerous areas as frequently as in the recent past. Iwobi’s presence has also taken some of the creative burden off Ozil and Alexis and it has certainly helped the latter in finding some form on the right flank.

All this sets us up for a juicy clash against West Ham this weekend. If not for Leicester’s stunning rise to the top, West Ham’s performances this season would have garnered a lot more attention. They set the tone with the opening day victory at the Emirates and since then, they’ve been largely consistent and look ready to take advantage of any slip ups from Manchester City and United in the race to the top 4. Payet has been one of the most exciting players to watch in Europe this season and it all looks exciting for the Hammers as they get ready to move into the Olympic Stadium next year. It’s going to be much harder tactically and physically than the two games we’ve won recently but the confidence from those performances should hold the team in good stead.

Ahead of the game, I got in touch with Iain Dale, editor of the leading West Ham blog West Ham Till I Die and presenter of the Drive-time show on LBC Radio. Take a read below to find out what he expects on Saturday, just how much West Ham fans love Slaven Bilic, Carl Jenkinson and much more.

We’re unbeaten in 12 and haven’t lost at home since August. However, we’ve not won in three and although we’ve played well some dodgy refereeing decisions in each of those games has prevented a victory. At Man United Schweinsteiger bundled our referee into the net, which the ref didn’t see so he allowed the goal. At Chelsea there was the penalty that shouldn’t have been given, and against Palace there was the Kouyate sending off. If you drew up a league table of teams who’ve lived to regret dodgy refereeing decisions we’d be at the top, If it wasn’t for those decisions we’re have nearer 60 points by now, instead of 51. But we’re not bitter! Oh, and not a single penalty this season…

Every married West Ham fan would happily let Bilic sleep with their wives. He’s become an instant hero, not just because of the points we’ve accumulated but because his team is playing with a style we’d almost forgotten. Sam who? We love that he’s so honest and to the point in his post-match interviews. He’s the sort of man who commands instant respect from the players and the fans. He’s signed some brilliant players and we’ve loved the style and panache they have brought to the team.

He can sleep with our wifes!

In some ways we are quite nervous about the move. In the long term it will be great, but teams who move stadiums often take quite a lot of time to settle in. I think it happened to you when you moved from Highbury to the Emirates. It’s a step into the unknown but the capacity has already been raised from 54,000 to 60,000, and from 2017-18 it will go up to 66,000, with the possibility of a further rise to 72,000. That’s quite a two fingered salute to those who thought we’d struggle to fill 54,000. Every match next season is already a guaranteed sell-out.

Payet has been the absolute star. If he hadn’t been clogged by Everton’s James McCarthy in November we’d have seven or eight more points. We didn’t lose many matches when he was out but we drew too many. But it would be wrong to attribute all our success to Payet. Manuel Lanzini has been an absolute revelation, scoring top notch and very important goals. Mark Noble is in fine form and Cheikhou Kouyate is our very own Vieira. There’s a real balance to the team and they all seem to get on with each other. Payet may be the star, but the others seem very happy for him to get the limelight.

He’s 29. I can’t imagine we’d entertain offers for him, especially as he really seems to love the club and is keen to be part of what Bilic is building. But I suppose every player has his price. I think he’d only leave for Real, Barca or more likely PSG. But they would have to double his money and offer West Ham £50 million, I suspect. Even then, I’d hope he would still stay.

Like most West Ham fans I’d rather win the Cup. I think a top 4 finish is entirely possible, but dropping two points against Palace was a major blow. If we lose to you on Saturday we can kiss the top 4 goodbye, I suspect, but to finish in 5th or 6th would be fantastic. We haven’t been below 6th at all this season so anything less than that would be disappointing.

Carl Jenkinson was one of our best players last season but this season he fell apart. I have no idea why. I wanted us to buy him on a permanent deal but Arsenal were too greedy. He’s brilliant in attack but less good defensively. If he showed his 2014-15 form he could make it at Arsenal, but given what we saw before he was injured this season, I have my doubts. It’s such a shame. Last season, with him and Aaron Cresswell, I genuinely thought we had the best pair of full backs in the league. Cresswell has continued his form. Sadly Carl did not.

On loan and on form in early season

I have many friends who are Arsenal fans. Their lack of confidence astounds me. If you win on Saturday you’re still very much in the fight. The trouble is Arsenal have been too inconsistent this season. You can be brilliant, but also awful. You always seem to be two players short of an outstanding team. Giroud is a perfect example of a player who can be outstanding on his day, but too often disappears from a game.

An incredible selection of authentic Arsenal shirts at amazing prices!

Cazorla always seems to have an outstanding game against us, so I’d probably pick him. I keep reading that Walcott or Oxlade Chamberlain are on their way to West Ham this summer. Frankly, given the choice of Michail Antonio or The Ox, I’d stick with Antonio. Similarly, I’d take Diafra Sakho over Walcott any day.

Hammers love a bit of Caz

I suspect football is just as affected as any other sport. I suspect it is the next big scandal that will engulf the game.

Bilic is a lot more flexible in his tactics than Allardyce ever was. I suspect it will be 4-3-2-1, with a midfield three of Noble, Kouyate and Lanzini, with Payet and Antonio playing just behind Sakho. Carroll tends to be used as an impact sub after 60 minutes. Tomkins will return at right back after injury, with Reid and Ogbonna continuing in central defence and Cresswell at left back.

We’ve done really well against the top teams this season. In fact we’ve beaten them all apart from a home defeat to Leicester in August and a draw at Old Trafford. We did the double over Manchester City and Liverpool. However, if I am honest, I think you will turn us over by the odd goal on Saturday. Unless, of course, you concede a couple of free kicks within ten yards of the penalty box. As the song goes, “We’ve got Payet, Dimitri Payet, I just don’t think you understand.” Well maybe you will after Saturday…

I am a 20 year old Engineering student from India. I’ve been an Arsenal fan for six years now, pretty much since the time I’ve known football. From being a active cricketer, I’ve changed into a football fanatic. I’ve tried playing the game but come to the conclusion that my football life will be more about watching and writing than playing.

My love for Arsenal and writing have found a nice place in the Arsenal world where I’ve enjoyed writing and analyzing the game. Despite a year long hiatus from blogging, Dave readily agreed to let me write for Gunners Town again for which I am extremely grateful. ‘The Opposing View’ will be a pre match feature where I’ll be talking to opposition fans on their views and opinion. Hope all of you enjoy hearing what the other side has to say!