George Graham was the Arsenal manager between 1986 and 1995. At this point he is our second-best ever manager, based on trophies, win percentage, and overall legacy.

The premier manager is Wenger, of course. Wenger has won ten trophies with us, though Graham won six, including a European trophy that Wenger hasn’t attained to date.

Below is a list of his honours with us as a manager, and a player: 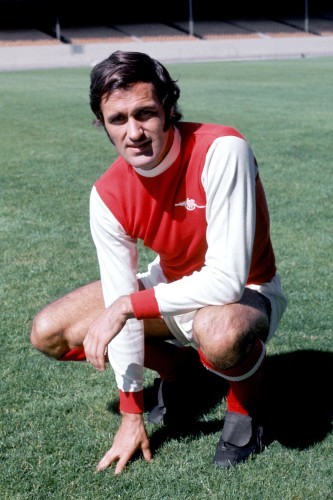 As a player and a manager, he has had a critical role in Arsenal’s history, including our first ever League and FA Cup Double, our first European trophy, and a league title win at Liverpool (the dominant team of that era).

Therefore, despite that rich legacy, and outstanding achievements, are the bung, his time at Tott*nham and Wenger’s success the only reasons he’s not celebrated?

I can remember when he first managed Leeds, and he turned them from near relegation fodder to top five contenders in the space of a season. It was not his fault Leeds fell into ruin, though he came back (and beat us) in an FA Cup game and was warmly received.

However, he joined that lot, won them a League Cup, and was roundly (and rightly) booed as he stepped towards the dugout.

By that time though, Wenger had certainly found his groove, so he was already being forgotten on two counts.

I think, possibly, this is a bit harsh.

The 1971 Double team was the first great Arsenal team since the immediate post-war period, and arguably since the Chapman sides of the ‘30s. It ended a period of relative malaise for the club, when even Sp*rs were a better team than us under the late Billy Nicholson. Graham scored many important goals in the campaign.

Anfield ’89 stands as one of the iconic moments of English football. And based on what Dixon, Adams, Winterburn et al. have said since, he got the outcome spot on through his team talks. He said to keep it tight until half-time, and then score two in the second half. This is what happened, exactly.

The 1991 league campaign was a near Invincibles, as we lost to Chelsea away (when they were small). But we played the best football in the country that year, and despite a battle at Old Trafford were the worthy champions.

1991 Nearly Invincible and Manager of the Year

The 1993 Cup Double was unique, as no team had ever won both domestic trophies before. It’s been done since by Liverpool and Chelsea, but we beat Sheffield Wednesday in both finals 2-1 to be the first to do it.

And last but not least, the famous back four, augmented by Seaman, Keown and Andy Linighan, were the most compact and drilled defensive unit in modern English football. Possibly of all time, period. Adams was the captain and leader of the defence, but all were of a similar mind-set and playing style. Tough, disciplined, determined and focused. Seaman added to this when joining in 1990, and were worthy successors to O’Leary, a legend of our club who became a squad player once they were established.

The Cup-Winners’ Cup win was exceptional, and a backs to the wall performance against a stunning Parma team. Parma doesn’t exist now, but at the time they were the Italian Blackburn Rovers. A club that had not seen the heights much before, and had been inflated by money. Remember Zola? Asprilla? Both were features in the Premier League shortly after, and we managed to contain and beat them in Copenhagen. To date, this remains our last European trophy win (though let us hope we can rectify this in 2018/Lyon).

1994 CWC Win was a tactical masterclass from GG

Graham thus has been a lynchpin in modern Arsenal, and made us great again (to paraphrase the current US President).

Graham got sacked from Arsenal due to accepting an irregular payment from a Scandinavian agent. Once the news broke out, he was fired by the Board, and banned by UEFA/FIFA for one year. This is an additional part which possibly damages his legacy, since corruption naturally cannot be condoned. However, despite claims he was a scapegoat and that bungs were rife at the time, the firing of one of the outstanding managers of his generation did tarnish the club’s image. And all amidst one of the worst league seasons in living memory, even to this date.

It’s possible that he may have resigned at the end of that season (94/95) due to the poor league form, and not getting the best from the players anymore. However, it is understandable that this may sour views towards him, despite his achievements.

Beyond the Bung, Tottenham and Wenger – Graham’s rehabilitation

So should we rehabilitate Graham in our historical analysis? Yes, Sp*rs are the enemy. They are sh.t. They lack our trophies, money, and global scope. They have won sweet naff all since 1991 (League Cups are secondary).

Did he join Spurs as a big “f-you” to Arsenal? It has happened before in a way, as this is how Pat Jennings joined us from them. He denied it at the time, and has since then been very praising of our successes and Wenger. However, if one IS a legend of a club, they do not manage their greatest and deadliest rival. It’s like Klopp getting sacked by Liverpool, and Sir Alex coming out of retirement to take his place. Alternatively, Jose resigning and Dalglish joining United. It just doesn’t (or shouldn’t, at least) happen.

In charge of the old rival as Wenger looks on

He did win them a League Cup, though we should be thankful it wasn’t the FA Cup, a European trophy, or the league. If it were a bigger trophy he won, then the ire would be even mightier.

However, part of what makes Arsenal special is not just winning, but pushing the envelope, and winning in new and unique ways. Herbert Chapman did this via the centre-half, the WM formation, and wingers. Cliff Bastin was our record goalscorer due to being deployed as a winger for much of his career. Wenger has changed English football via dietary and tactical innovations, as well the Invincibles and record FA Cup wins (as a club and as an individual manager).

Graham’s contribution to this is as aforementioned. Anfield ’89, the Cup Double, and the development of the defence stand as unique events and changes in English football.

Established Arsenal as a force again in May 1989

Wenger has taken us to a new level, without question. Under Graham, we re-established ourselves as a force, but we still were considered a big English club and had been for decades prior. As it stands now, Wenger has taken us from being big domestically to being huge globally as well. We possibly shouldn’t let Wenger’s undoubted achievements stand in the way of acknowledging Graham’s contribution to our history, culture and legacy.

If Arsenal stands for pedigree, development, innovation and winning in style, then Graham surely should be more honoured for that, despite the bung, his Tott*nham associations, and the triumphs of Arsene Wenger.

3 Responses to George Graham – Have bungs, Sp*rs and Wenger undermined his legacy?