In part 1, I examined the case as to what Rioch offered Arsenal, and the effects his short tenure had on the club.

Bruce Rioch, whilst born in England, was a Scottish international player and captain, having captained his country in the 1978 World Cup (the “Gemmill” World Cup).

Rioch captaining Scotland. He is on the far-right of the picture.

He played for various clubs, and managed Middlesbrough and Bolton Wanderers, before coming to Arsenal. He had developed a reputation as being a taskmaster, but for also playing good and attractive football, and had done well to get Bolton into the Premier League via the playoffs.

He fit the bill of what we needed and offered something new compared to the latter years of George Graham.

With David Dein as our vice-chairman then, he started off well in getting a big name, via Dein’s assistance. Bergkamp joined, and this signing was very un-Arsenal. Why?

We never really went in for big names, like United or Liverpool did. We could afford them, but we chose to develop talent and overall executed a conservative and prudent model. Bergkamp’s arrival was a statement, in that we wanted to compete at the high-end of the table again. And that we wanted to win, and win with style. The days of boring Arsenal had ended, or at the least, we were determined to end them. 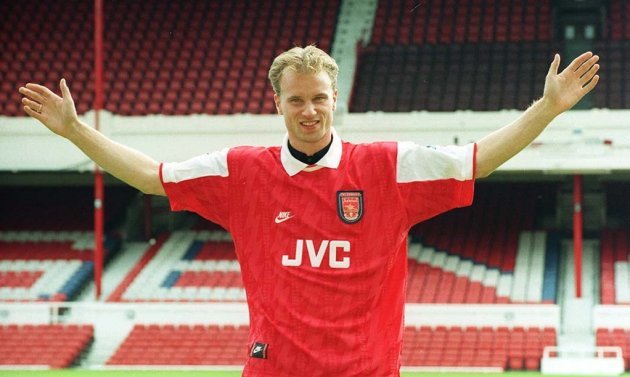 Bergkamp was joined by David Platt from Italy, and this too signalled a new direction. The England captain at Arsenal? A top, world-class player, at Arsenal? Well, yes. Platt was arguably England’s best-known player globally at this point, largely since he had played in Serie A for Bari, Juve, and Sampdoria.

Both of these signings were major coups and showed Arsenal had a new direction and strategy.

The pre-season tour in Sweden and Norway lent to this. We beat some local teams there 8-0 a piece, and Bergkamp starred immensely. there was also a pre-season friendly with Inter, where we were unlucky not to win.

There also was a funny story, concerning Wright and Dennis’s first meeting. Let’s just say it was speedy and fuelled encounter……

The first game against Middlesbrough was eagerly awaited, though it was an old boy who shone, and not the new guys.

Ian Wright, Wright, Wright, scored an equaliser in the opening game, which was at home to Boro. An ex-scum player, Barmby, scored for them, but Wrighty headed home to get a reasonable draw.

After this, Dennis got Wrighty an assist at Goodison Park vs. Everton, whilst Platt got his first goal for us. And Platt scored again at home to Nottm Forest, in which old boy Kevin Campbell for them having left us in the summer.

Some notable wins in this period came against Man United (1-0) and Southampton (4-2), in which Bergkamp got a wondrous brace for his first Arsenal goals.

We lost to the Scum at their ground in November, and by December we were in a reasonable league position.

Were their improvements at this stage? Yes. We were playing more exciting football. We were passing more, and the team more or less had to play this way due to Bergkamp’s presence. The team overall was starting to play with more confidence and flow, and it showed via our higher consistent league positions compared to the previous season.

The project, as it were, in revamping the team and ultimately the club, was taking shape.

The project took a slight derailment, via a 3rd round FA Cup loss to Sheffield United. the first game was at home and ended 1-1, though the replay finished 1-0 to the Blades as we didn’t show up at all.

What’s more is that Wrighty, as captain for the day in Adams’s absence, scored a delightful goal at home to Everton, but we lost 2-1, leaving us in mid-table.

And to add insult to injury, Wrighty handed in a transfer request, citing that he needed time to get away since he had differences with Rioch.

Many Gooners and pundits in fairness thought we could challenge for the league that season. The win vs. Man U, the eventual champions, proved this in some measure. However, our team was perhaps not as good as we made out to be, and United and Newcastle proved they were the two best teams that season.

We lost in the League cup semis to Villa, the eventual winners, and from then went on a run to get a UEFA Cup place.

This reached its climax in the final game, where we challenged Tottenham and Everton for the final UEFA Cup spot. Spurs had to beat Newcastle, who in turn had to get a better result than United who was away to Boro. they got a 2-2 draw in the end, but we won in dramatic style with a late 2-1 victory. Our new boys both scored, with Bergkamp getting a long-range shot in the last few minutes.

Getting a European spot is not a trophy. But it provided some meaning for the club and something to look forward to, considering the up and down season we had. Moreover, having spent a lot on Dennis/Platt, we needed some return from this. Yes, it wasn’t’ a trophy, but it did potentially bring more revenue and a chance of a European trophy.

The summer of 1996 was a tense one. Despite initial links and promise, we didn’t’ sign anybody. There was no transfer window then, at least not like today, so we didn’t have a late August rush. But United, Newcastle, and other top teams were getting players. The Euros happened, which of course put in a big shop window in our own country. And still, no players. Maybe this window was a shadow of things to come, many years into the future, eh?

We did get in John Lukic on a free transfer. And he was welcome as an Arsenal legend (well he was there at Anfield 89).

Then, with a few days to go before the season started, Rioch got sacked.

It was out of the blue, and possibly a bit misguided concerning the timing. However, then Chairman Peter Hill-Wood released a statement saying that Rioch and the board didn’t get on, and they had continual clashes on player wages and targets. Many targets were not attainable, and Arsenal couldn’t afford the wages, nor wanted to get involved with some agents and representatives.

The spat with Wrigthy also didn’t aid his cause, and many players since then have stated that they didn’t respect Rioch or his methods at the time.

Rioch’s replacements were touted as being the late, great Cruyff and Sir Bobby Robson. And amidst a caretaker leaving, and club legend Pat Rice being the new caretaker, we were linked with some French guy with a German-sounding name called Arsene Wenger. Arsene who??? There was no way this guy from GrampusEight would help us win anything big like league titles or cups, surely not….

Rioch’s time at Arsenal, on the surface, was OK. there were genuine expectations that Arsenal could win the league, which proved misguided. Our midfield was not to United, Toon’s, or Liverpool’s levels. Moreover, our squad depth was pretty minimal. A fifth-place finish, given the general context of our squad, was fair overall.

The playing style definitely improved, with us playing a passing game and looking to utilise the midfield and flanks more. We seldom played the ball over the top, to exploit Wright’s pace.

We could see in some measure, the green shoots of a new Arsenal.

Despite these positives, the overarching negative was that his personality and style rubbed many the wrong way. In any organisation, how people fit together on an interpersonal level is often key to how people progress and achieve. It’s like the old cliche of an underperforming guy who manages to still get good projects due to his charm. Well, he is pleasant to be around, possibly, hence why he gets this. It’s not irrational, and it’s a no-brainer. Rioch had a personality clash, and it cost him big time.

Rioch didn’t end out well. But it showed what could be, and what did happen under Wenger. His short tenure, in my honest view, had some plusses but was worsened by his own interactions with the squad and board. It was a pleasing start and showed that Arsenal could be stylish, and eventually win with style.

We played better football. We managed to see some top quality players, one of which became arguably our greatest ever player. We saw old stalwarts/legends prosper, and shine in arguably our best game that season:

It was a definite step up from the latter Graham years, and Rioch nudged us into the direction we’ve seen for twenty years and more.

Wenger is our most successful manager, ever. But he is part of a continuum featuring Graham and Rioch. And now Mr Emery.

Bruce’s bonus….or not? A story of the 1995/1996 season…..Bergkamp and Beyond
Enjoy the World Cup and support your country even if they have multiple Spurs Players in their team!