So the near-impossible didn’t happen despite my somewhat elevated expectations and we went down to City at the Etihad. However, while I do not feel particularly upbeat about the loss itself (no one ever does, do they?), yesterday we didn’t see a capitulation akin to that at Anfield.

There’s a lot of talking points to get your teeth into, so I’ll just get to these.

‘In the build-up to the game Wenger promised to attack City and the starting XI reflected that. Arsene went with a pretty unusual 4-3-2-1 formation (otherwise known as the Christmas tree formation). Although it is not his preferred and, arguably, more direct approach of a 4-2-3-1, it was also not a more defensive 3-4-2-1.

Moreover, the changes to personnel reflected Arsene’s thinking before the game. We played with two 10s in Ozil and Iwobi, Ramsey was also kept on, Kolasinac and Bellerin resumed patrol on the wings and Monreal paired Koscielny in central defense. Sanchez was left to plough a lone furrow up top, but this plethora of players is as front-footed as it gets.

Iwobi got the nod

Despite being in a shape which allowed for more defensive security and considerable leeway going forward, it is the former we were doing for most of the game. It is obvious Wenger tried to win the midfield battle by crowding it both numerically and quality-wise, however we were not successful in dictating the tempo of the game. Much like I feared prior to the game, City simply had too much quality in midfield to let us rule over the proceedings.

Nonetheless, this is the part where I tip my hat to Arsene Wenger. The Frenchman didn’t set out his team to hide, he clearly adjusted personnel and tactics to deal with a particular opponent and this approach paid off to an extent. We limited City to their lowest number of shots in a single league game (9), while almost matching it ourselves (6).

No, we were not hopeless. Which brings me to…

I usually have trust in Michael Oliver’s abilities. Trust which no other ref in the league enjoys in my eyes. Clattenburg came closest to being competent, everyone else is just a varying degree of awful on a sliding scale.

However Oliver made one mistake which cost us the game: he awarded the penalty to City. Sterling dived under the slightest contact from Monreal, Oliver thought it merited a foul and pointed to the spot. 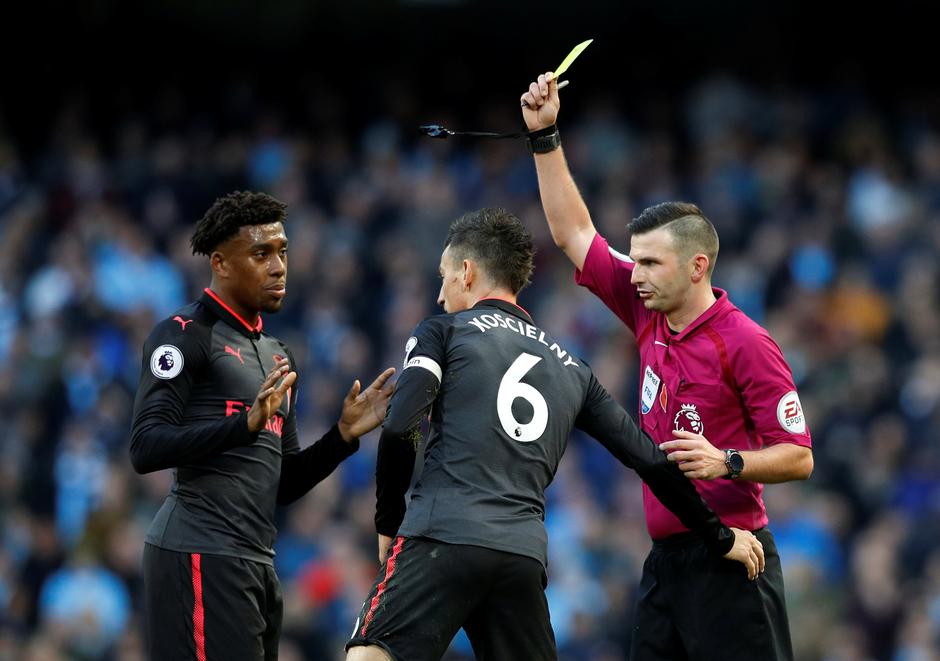 To our credit, we recovered. Lacazette came on to score and spark a revival in our hearts, but then another awful refereeing decision knocked the wind out of our sails. The linesman failed to see a clear offside both Silva and Jesus were in and the latter converted from close range from a former’s pass.

“The physical level is very good, the decisions…the third goal, at 2-1 we are in the game, but he gives a clear offside goal. That kills the game for us. Last year, if you look back, we conceded two offside goals as well. Of course, they are a top team but that makes it even more difficult for you. The decisions were just wrong.”

If you read my articles you know I don’t usually hide behind refereeing mistakes. This is the part where I say that City are a better team, they were a better team yesterday and they deserved the win overall.

However this is also the part where I echo the thoughts of a friend of mine, who said that if City are that good, they shouldn’t need refereeing help in any shape or form. The truth is quite simple: we had City under pressure after scoring with 25 minutes to go. We could have got an equaliser, but we didn’t get the chance.

All too often in football, matches turn on one moment. Teams had luckier escapes than we would have had, had we got that equaliser. And today we would be talking about how Arsene got his tactics spot-on, how we restricted City from showing their true potential and how this can merit a draw.

Instead, we are left with two big refereeing blunders which tarnish the overall picture. No one forced City to miss their chances in the first half. Go on and score if you are good enough. I do not have a problem per se with City winning if they show they are worthy of it; I do have a problem with the way it was accomplished.

Whatever reasons Wenger might have had for putting Sanchez up front, it’s fair to say this was one of his less inspired decision yesterday. I also maintain starting Ozil was a mistake, but not nearly as much as starting Sanchez, especially as a lone striker.

Simply put, he was awful. He took a grand total of one shot (off target), completed no dribbles, got into three offsides (how?) and was dispossessed at least 11 times. The contrast was all the more vivid when Lacazette came on and scored. Just like that. No fuss.

And don’t get me started on the Chilean’s nasty temper. The tantrums he throws, the constant swearing at teammates, the sulking after games. Right now Sanchez is the definition of a disruptive influence and I would like to see him benched until his behavior improves or until he is sold.

Probably taking his only shot

Alexis’ antics, coupled with his non-existing output yesterday, should give plenty of thought to Arsene. I do hope he stops pandering to our “stars” and stamps his authority with an iron fist. It’s about time, and it’s what this particular situation requires.

By the way, for some extra reading on Sanchez’ audition to City yesterday, I highly recommend this piece by JIm White from the Telegraph. It is behind a paywall, but you can get a free account which will allow you for one free article per week. This week use your quota on this particular piece.

You can rarely take heart from a defeat, however you can’t deny we were not bad at all yesterday. If largely nullifying City comes at a cost of playing less expansive, spectacular football, sign me up. You probably understand yourself that even more defensive approaches can look quite spectacular if done right. Think about Atletico’s successive wins over Barcelona and Bayern Munich in the Champions League a couple of seasons ago.

What I have seen yesterday was far from a meek surrender, and that’s all I could ask for. We were visibly shaken and deflated after conceding the third, and whilst we seem chronically incapable of playing to the whistle, overall it could have been so much worse.

We demonstrated tactical maturity and flexibility rarely associated with Arsenal sides recently and we didn’t get the rub of the green. Who knows how it would have ended otherwise.

I’ll leave it at that. It’s the international break for the next two weeks, so I will see you for the North London derby right after it. Take care.

Come on Lads – Support The Arsenal or Jog on with the Plastics and the Glory Hunters
Please Mr. Kroenke, Mr. Wenger, and Mr. Gazidis…..NO new “top-six global TV deal”!

10 Responses to The Gunners prove they are not shy as the officials hang them out to dry: Manchester City 3-1 Arsenal