I am loving this!!

Since boxing day, Mikel Arteta has favoured a 4-2-3-1 and it’s a formation that the former Arsenal captain believes is tailored to the current side and allows key individuals to be utilised in areas in which they can showcase their best qualities.

During the build-up phase, Arsenal set up in a 3-2-2-3 shape, consisting of a back three of Takehiro Tomiyasu, Ben White and Gabriel. Operating just ahead was Thomas Partey and Granit Xhaka in the engine room of the team, tasked with facilitating ball progression.

Both Martin Odegaard and Emile Smith Rowe acted as creators within the half-spaces, whilst Bukayo Saka, Pierre Emerick-Aubameyang and Kieran Tierney acted as the front three. 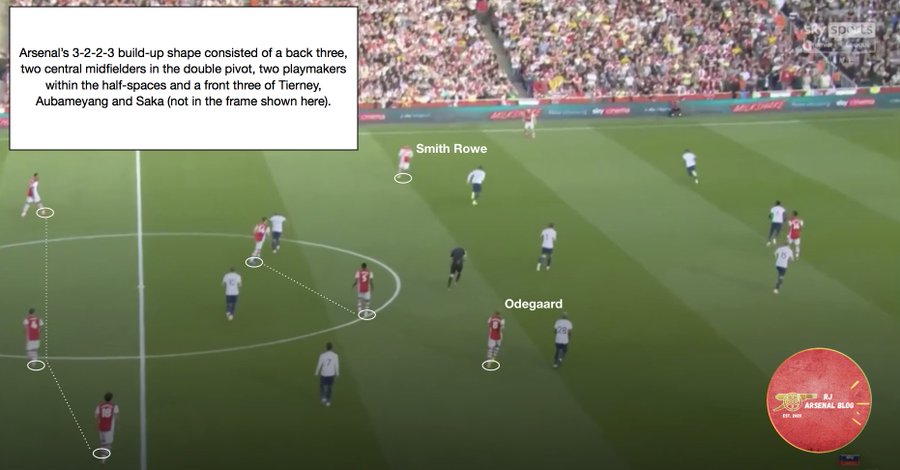 As the ball is progressed into the final third, the Gunners’ 1st phase of play shape morphs into a 2-3-5 structure, with one full-back predominantly staying deep whilst the other joins the attack with underlapping or overlapping runs depending on where the inside forward is positioned.

The principles of defensive stability Arteta installed last season have been displayed in their last three league games prior to the North London Derby, and similar fundamentals were used on Sunday. A 4-4-2 mid-block was utilised to achieve central compactness.

Interestingly, Odegaard frequently dropped into the midfield line, creating a 4-5-1 of the ball shape. Whilst this does leave Aubameyang isolated in transition and hinders quick counter-attacking capabilities, perhaps the Arsenal boss wanted further defensive assurance.

After a tentative opening spell, the first 45 minutes belonged to Arsenal, dominating all aspects of the game. Arteta wants his men to adopt an aggressive mindset out of possession and to squeeze as a unit, thereby allowing sustained pressure to be established.

In order for this to occur, individuals must be comfortable in a high line and be confident in their ability to recover positionally. White, Gabriel, Tomiyasu and Partey all possess the fundamentals, with the former illustrating this with his contribution in the 11th minute.

As the ball is played into the path of Harry Kane, the former Brighton man is quick to step in and win the duel, which allows Xhaka to collect the second ball and find Odegaard.

Arsenal’s number 8 is then quick to release Saka, who delivers an excellent cutback for the onrushing Smith Rowe to convert.

A goal made in Hale End, Arsenal’s lead was thoroughly deserved and certainly, the availability of the Gunners’ strongest backline and midfield enabled fluid build-up.

Despite Nuno Espirito Santos persisting with a 4-3-3 shape in advanced areas, Arsenal were able to bypass their press with ease.

The Spurs manager is well aware of the in possession qualities both Partey and Xhaka provide and clearly wanted his midfielders to block central passing lanes. But with Smith Rowe and Tierney rotating in terms of who drops into the left-back position, creating a 3-3 structure, this allowed space to open up.

The fluidity and positional interchanges caused confusion for Spurs’ three-man midfield, particularly Tanguy Ndombole and Dele Alli, and with each individual amongst Arsenal’s backline capable of providing ball progression, accessing the final third was far too easy.

A combination of excellent pressing and ruthless finishing proved too much for the Spurs backline, with the second goal epitomising the beauty of a fluid counterattack.

The Croydon De Bruyne delivers a first-time pass for Tierney, who then finds the Arsenal captain. Aubamayeng drags Sanchez out of position and feeds Smith Rowe, who showcases breathtaking speed before grabbing a well-earned assist.

Soon after, the contest was finished. With Kane losing possession cheaply, Odegaard offers himself in a deep position, draws the attention of two Spurs players and finds Smith Rowe in space. An excellent ball is delivered into the path of Saka, who scores his first of the season and capped what was a scintillating first half of football from the team in red.

Following a positive 10 minutes after the interval, Arteta prioritised a more cautious approach, by conceding possession and allowing Spurs to dictate the tempo, knowing that they would struggle to break down his side’s well-drilled defensive structure.

Although Son Heung-min reduced the deficit in the 79th minute and Ramsdale was forced into making a couple of important stops, Arsenal never showed signs of dropping their lead and are now above their bitter rivals on goal difference.

A top performance from both the players and manager.

Aaron Ramsdale: Ramsdale’s fourth game in Arsenal colours and the 23-year-old impressed yet again. Whilst Xhaka managed to bail his keeper out following his pass in the build-up to the Gunners’ 2nd goal, the former Sheffield United keeper illustrated his shot-stopping abilities in key moments.

Ben White and Gabriel: The partnership Gooners across the globe were dying to see and in the three games the two have started together, they’ve illustrated excellent traits. Superb in build-up, aggression in duels, and defensive assurance; the duo nullified the dangerous Kane.

Takehiro Tomiyasu and Kieran Tierney: The Japanese international wouldn’t have envisaged such a smooth start to life in Arsenal colours. Aerial prowess and prevented Son from having joy, it was an outstanding display. Similar could be said for Tierney, who defended the left flank effectively, although the Scottsmans final ball was left wanting.

Thomas Partey and Granit Xhaka: Without a shadow of a doubt the best midfield pivot the club have available. Both key in quickening the transition from defence to attack with progressive passes and ensured the two central defenders weren’t isolated and exposed against Spurs’ frontline.

Bukayo Saka: A plethora of versatility, but Saka is at home on the right-wing. The 20-year-old is far more unpredictable and demonstrates greater levels of productivity, with Sunday’s display further amplifying these comments. A goal and assist to his name.

Martin Odegaard: Output is crucial, but so are the finer details. Odegaard may not have been the star, but his role shouldn’t go noticed and he was a key cog in team functionality. Led the press, facilitated ball progression and always opened up space for supporting teammates nearby.

Emile Smith Rowe: Ball carrying prowess, quick interplay, sharp bursts of acceleration, excellent decision making, infiltrating space, the desire to impact the game in the box: it really was a sensational performance from the young Hale End graduate and from my perspective, he was the man of the match.

Pierre-Emerick Aubameyang: Arteta wants his number 9 to be well rounded and over the past few months, Aubameyang has shown clear improvements in his ability to act as a reference point. Held the ball up effectively, pressed relentlessly and scored a terrific goal.