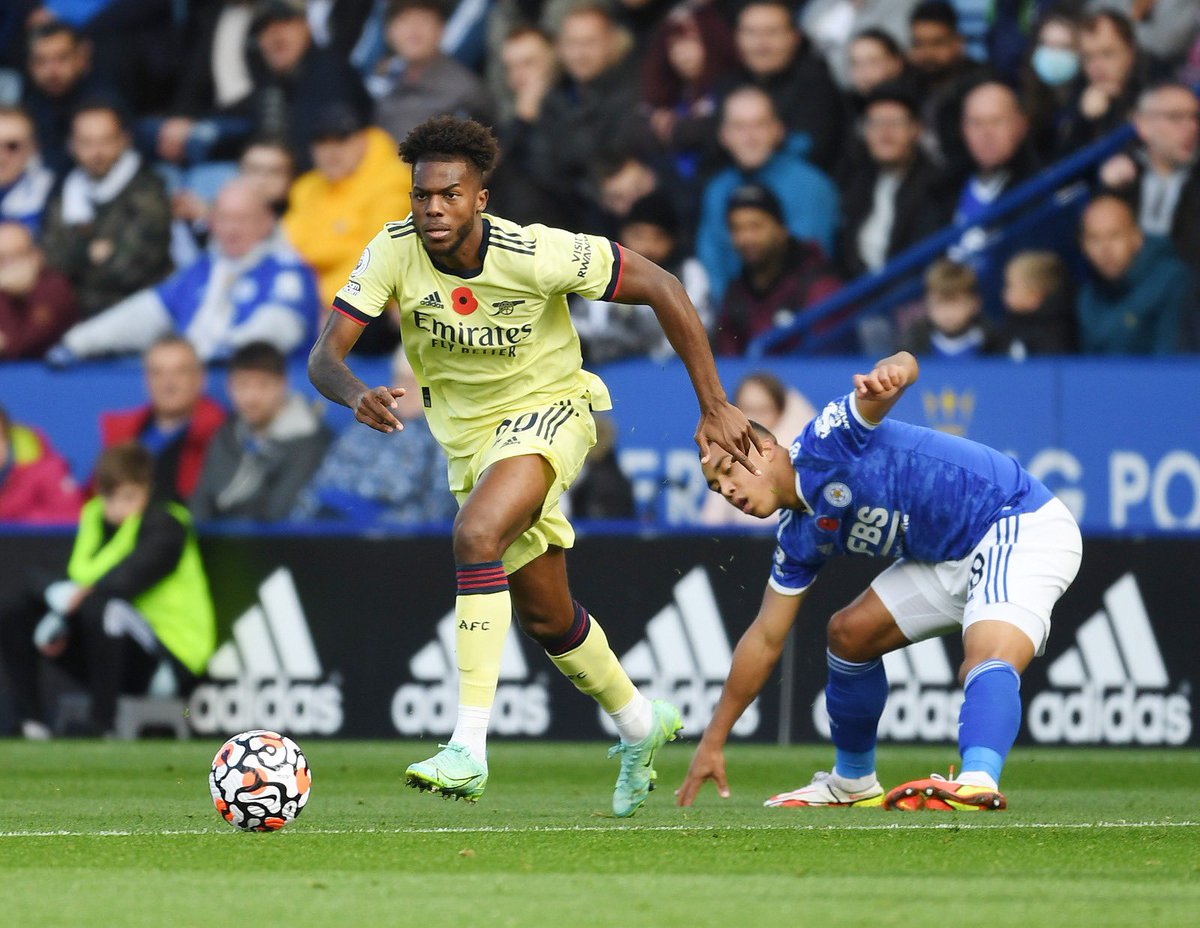 Three games into the 2021/2022 Premier League campaign, Arsenal were in disarray. Zero goals scored, zero points on the board and rooted to 19th in the table going into the first international break of the season.

Performances were incredibly underwhelming and pressure was mounting on Mikel Arteta, with many Gooners across the globe demanding a change in management.

But it’s worth stressing that mitigating circumstances were present. Ben White, Gabriel Magalhaes and Thomas Partey are crucial first-team players who are tailored to modern-day football and in their absence, a decline in performances levels was to be expected, so to judge the team after just three games was somewhat unfair.

Seven league games later and with Arteta having an almost fully fit squad to choose from, the Gunners have taken an impressive 17 points from a possible 21, which has rocketed them into sixth place.

Their latest eye-catching result came on Saturday afternoon against Leicester City at the King Power Stadium, where Arteta’s men walked away from the ground with three precious points, making it two wins on the bounce.

Aaron Ramsdale and Gabriel were showered with immense praise for their individual contributions and rightly so, particularly the former, who had an incredible day in between the sticks, but in this article, I wanted to focus on the first 30 minutes of the fixture, ‘specifically’ looking at Arsenal’s in possession quality in this period.

Unsurprisingly, Leicester set up with an identical system to the one Aston Villa deployed at the Emirates, a 3-4-1-2.

Given the fact that Arteta had huge success against Dean Smith’s men last time out using a hybrid 4-2-3-1/4-4-2, it made sense to stick with similar principles and that’s exactly what the former club captain did.

During build-up, Arsenal persisted with a 2-4-4 shape, consisting of central defenders White and Gabriel, who formed the first line of attack, with full-backs Takehiro Tomiyasu and Nuno Tavares holding the width just ahead.

The retrospective positions the two new summer signings held enabled both Partey and Sambi Lokonga to remain within close proximity to each other and form a midfield partnership within the engine room.

Certainly, this is a structure that ensured balance was retained and with Leicester applying pressure with a front five (Youri Tielemans, Boubakary Soumaré, James Maddison, Kelechi Iheanacho and Jamie Vardy), Arsenal always gained a numerical advantage and both Alexandre Lacazette and Nuno Tavares were crucial cogs in build-up.

Starting with the Frenchman, and the £52 million 2017 summer signing once again was used as a linkage during the first and second phases of play, regularly offering himself to teammates and dragging his marker into areas he didn’t want to be in, with the frames below illustrating the influence he had in a deeper position.

As Tomiyasu receives the ball from White, Lacazette provides the Japanese international with a simple passing option and in turn, Arsenal’s number 9 pulls Soumaré out wide and away from his designated zone.

Following a quick one-two between Lacazette and Tomiyasu, the latter is then able to drive inside and exploit the spaces presented to him, thereby progressing the team upfield.

Holding the ball up, bringing others into play and effectively acting as a reference point are clear strengths Lacazette possesses and whenever Arsenal did progress forward through the right-hand side, the former Lyon forward was crucial to the functionality of many attacks, and he certainly played his part in the lead up to Arsenal’s second goal, courtesy of Hale End graduate Emile Smith Rowe.

Tavares likewise was arguably just as influential on the opposite flank and the biggest praise he can be given is the fact that so far, his competitor Kieran Tierney hasn’t been missed.

Previously in the absence of the dynamic Scotsmen, Arteta was without a naturally left-footed full-back in reserve, meaning that the Spaniard was forced into making significant changes to the overall team dynamics in order to accommodate for this loss, but unfortunately, it was to no avail.

This is why it was imperative that the club analysed the market and brought in an adequate replacement who, profile wise, is stylistically similar to Tierney and it’s fair to say that so far the acquisition of Tavares seems to be an astute piece of business.

Yesterday, the former Benfica defender was a key operator in the build-up phase, with the following frames illustrating how pivotal he was in enabling the team to move through the thirds in a positive manner.

Shown below is Arsenal’s 2-4-4 build-up shape and Leicester pressing with a front five. As previously mentioned, a numerical advantage for the north Londoners was always achieved and quite often Tavares acted as the spare man since the movement and intelligent positioning of Smith Rowe kept Leicester right wing-back Timothy Castagne at bay.

As the ball reaches the feet of the Portuguese U21 international, Tielemans attempts to engage but fails miserably as Tavares glides past his man with relative ease before releasing Lacazette, who drifts out wide and delivers a dangerous ball across the six-yard box.

The raw pace, athleticism and power of Tavares gave the team an added dimension, but it wasn’t just his breathtaking ball-carrying that created issues to the Foxes, the 21-year-olds ability to drill forward passes into spaces between the lines was a key component that brought the likes of Aubamayeng into the game.

As shown below, Tavares yet again is in a scenario where he has plenty of time and space in possession. As the ball is played into his path, he delivers an incisive pass into the feet of the Gabonese international, which breaks the home side’s half-hearted press, with the ball eventually being shifted to the right flank.

Accessing the final third became very easy for Arsenal and what became even more problematic for the home side was the fact that when they attempted to apply significant pressure on goalkeeper Aaron Ramsdale, the 6 ft 2 in stopper showcased his tremendous passing range and continuously picked out attackers further ahead in this opening spell, giving the Gunners an alternative avenue in ball progression.

The flexibility and variety in build-up enabled easy final third access, which in turn forced the Leicester backline to operate deep within their own box.

Yes you can confidently say that the opener came from a set-piece situation and the second stemmed from brilliant counter-attacking play, but the success Arsenal had originated from sustained pressure and both Lacazette and Tavares were the unsung heroes.